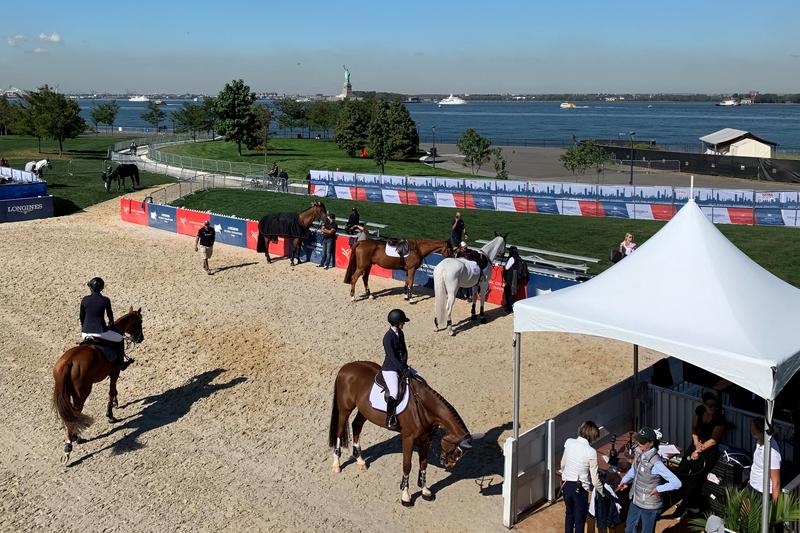 NEW YORK (Reuters) – You can lead a horse to water but can you make 95 of them board a ferry from Lower Manhattan to an island in the middle of the New York Harbor?

Riders warm up their horses in the practice ring at the Longines Global Champions Tour New York with the Statue of Liberty in the background, on Governors Island, New York, U.S. September 27, 2019. REUTERS/Amy Tennery

The answer, thankfully for the organizers of this weekend’s Longines Global Champions Tour show-jumping competition on New York City’s Governors Island, is yes.

The premier equestrian event, which marks the circuit’s finals and draws some of the sport’s biggest names, demanded that 700 bales of hay, 2,600 bales of shavings, approximately 2,000 tonnes of sand and 200 bags of carrots be hauled by boat to the 172-acre tract of land, which is inaccessible by car.

Organizers had already overcome the hurdles of building stables, practice and performance arenas plus 24-hour-a-day accommodation for vets on the otherwise uninhabited island.

The Tour’s Sport Director Marco Danese, who has put on show-jumping events from the sandy beaches of Miami to the Monaco Riviera, told Reuters it was a challenge worth taking on for the “iconic” venue he hopes will expose a new fanbase to the sport.

“It’s the most difficult one. We cannot compare,” said Danese, who oversaw the construction of an arena that boasts dazzling views of One World Trade Center and the Statue of Liberty. “For the horses it was perfect.”

Danese brought in a separate ferry service to ensure access for riders, grooms and staff starting at five a.m. and arranged for barges to bring in supply trucks.

The three-day competition is the largest sports event ever orchestrated on the island, a seasonal refuge for urban-weary New Yorkers and tourists, according to Sarah Krautheim, a spokeswoman for the Trust for Governors Island.

“They were looking for an iconic New York City venue,” Krautheim told Reuters, adding that the Trust expected approximately 2,000 visitors per day at the event, which is free for those attending.

The island, which had 8,000 visitors per year when it opened to the public in 2005 and had close to one million visitors this year, regularly hosts concerts and other cultural events.

“The idea is to promote a little bit our sport in different areas and to attract also people who are not familiar,” said Danese.