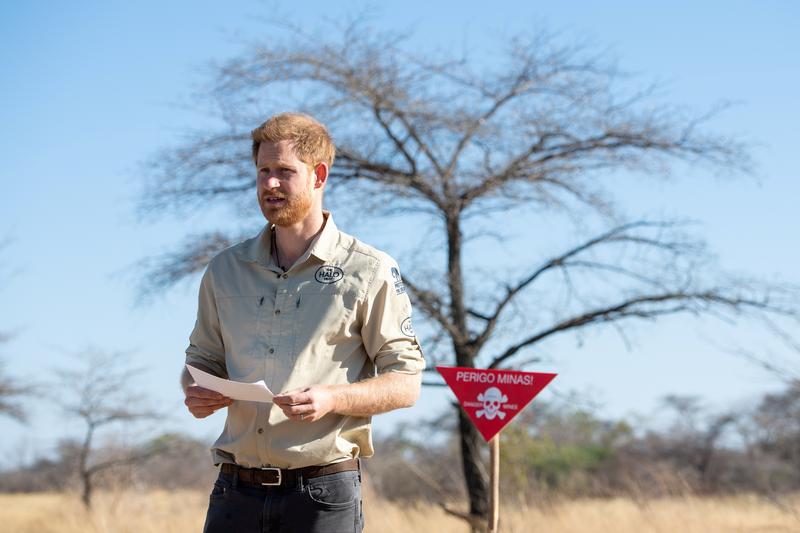 FILE PHOTO: Britain’s Prince Harry, Duke of Sussex, makes a speech during his visit to a working de-mining field with the HALO Trust in Dirico Province, Angola, September 27, 2019. Dominic Lipinski/Pool via REUTERS/File Photo

JOHANNESBURG (Reuters) – Britain’s Prince Harry is due on Saturday to meet Angolan President Joao Lourenco in Luanda, as the first week of his family’s southern Africa tour draws to a close.

Harry, his wife Meghan and their four-month-old son Archie landed in South Africa on Monday for their first overseas tour as a family, which has featured engagements including visits to poor townships and a meeting with Nobel Peace Prize laureate Desmond Tutu.

But Harry has travelled alone to Angola, where he visited a landmine clearance project that featured in some of the most famous photographs of his late mother, Princess Diana.

On Saturday, he will meet Lourenco in the morning in the presidential palace, before visiting a hospital to see the work of a project spearheaded by the first lady, Ana Dias Lourenco.

The project focuses on preventing the transmission of HIV/AIDS from mothers to their babies in a country where high fertility, a young population and lack of awareness are driving infection rates up.

On Sunday the prince will move on to Malawi, again for his first official visit, though he has visited the country several times privately in the past.