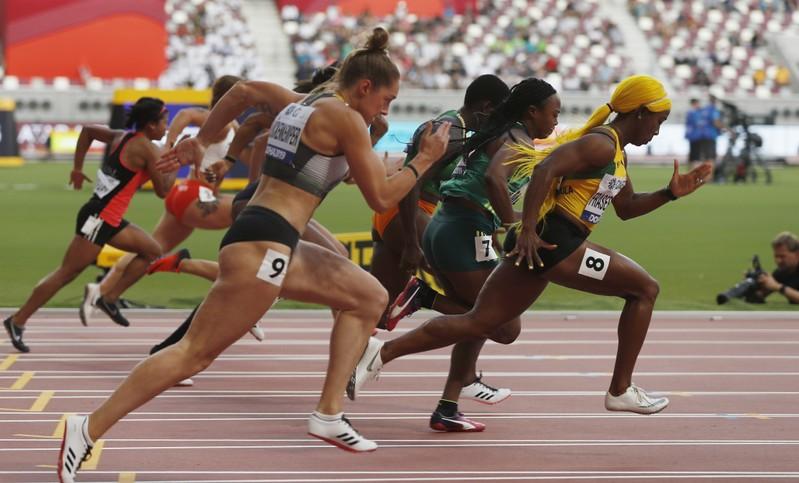 DOHA (Reuters) – Jamaica’s Shelly-Ann Fraser-Pryce clocked the top time ever in a heat of the women’s 100 meters on Saturday as the world athletics championships got off to a blazing start for the second straight day.

While temperatures reached 40 degrees Celsius (104 Fahrenheit) outside Khalifa Stadium, inside athletes competed in the air conditioned comfort of the futuristic venue where the thermometer hovered pleasantly in the mid-20s.

It was certainly no sweat for Fraser-Pryce, her waist-length bright yellow hair flowing behind her, as she cruised home in 10.80 seconds, the fastest time ever in a women’s 100m heat at the world championships not including the semi-finals.

“The hair is the sunshine,” said Fraser-Pryce, Olympic champion in 2008 and 2012. “It’s definitely a wonderful feeling to be here in Doha.

“Jamaica is hot. Doha is hot, so why not bring my sunshine?

“I think it was a good run. I’m pretty excited to be able to come back.”

The controlled effort delivered a clear warning to other gold medal hopefuls as the 32-year-old bids to become the first man or woman to win four 100m world titles.

Jamaica’s women have taken over the mantle of global sprint superpower from their men whose dominance has declined since the retirement of 100 and 200m world record holder Usain Bolt, who is not competing at the worlds for the first time since 2003.

Fraser-Pryce, who only returned to the track in earnest last year after giving birth to a son, will be joined in the semi-finals by compatriot Elaine Thompson.

The Olympic 100m champion’s effort was not nearly as impressive as her team mate’s but she easily won her heat in a time of 11.14.

Ivory Coast’s Marie-Josee Ta Lou, world silver medalist at 100m and 200m in London two years ago, also turned in a sizzling result with a personal best for the second best time of 10.85.

Defending champion American Tori Bowie also advanced but was made to work, coming home third in her heat in a pedestrian 11.30.

A brilliant display of sprinting got Day Two of the championships off to a flying start but there were few to witness it in a largely empty Khalifa Stadium.