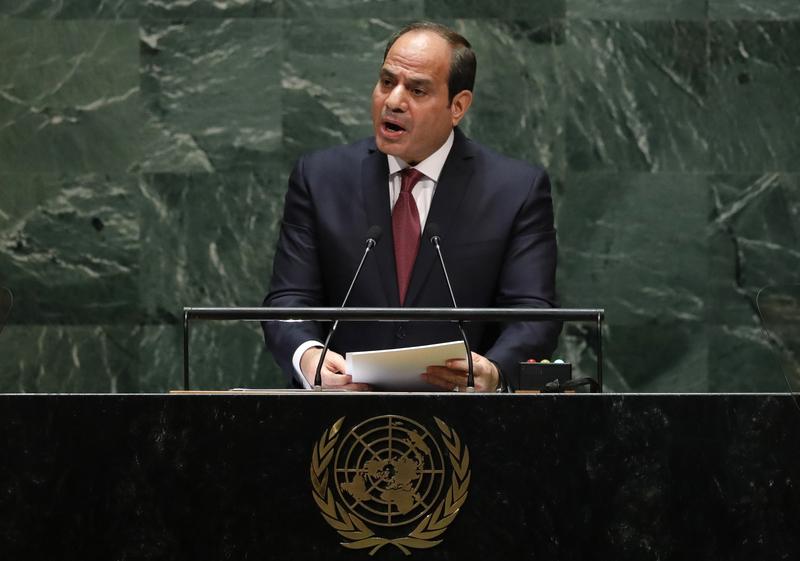 CAIRO (Reuters) – Egyptian security forces closed off entrances to Cairo’s Tahrir Square on Friday and deployed police reinforcements after a call for a second week of rare anti-government demonstrations.

Protests broke out on Sept. 20 in Cairo and other cities following online calls for demonstrations against alleged corruption by President Abdel Fattah al-Sisi and the military.

Sisi, who has been in New York for the past week attending the United Nations General Assembly, returned to Cairo on Friday morning. Pictures posted on Sisi’s official Facebook page showed him greeting religious dignitaries and a crowd of supporters on a roadside.

Since last weekend’s protests, authorities have carried out a campaign of mass arrests which rights monitors say has seen at least 1,900 people detained. Egypt’s public prosecutor said on Thursday that “not more than 1,000” had been questioned after participating in protests.

There have been calls for new protests this Friday, though government supporters are also planning rallies to show their backing for Sisi.

The protests have unnerved investors and led to a pro-Sisi campaign in Egypt’s strictly controlled media.

Security forces have stepped up their presence in main squares in major cities and have been checking mobile phones for political content.

On Friday morning, roads leading to Tahrir Square in central Cairo, the epicenter of protests that led to the overthrow of former President Hosni Mubarak in 2011, were closed to traffic, There was a heavy police presence around the square and at some junctions in the city center.

Sisi, who came to power after leading the overthrow of Islamist former President Mohamed Mursi, has overseen a broad crackdown on dissent that has extended to liberal as well as Islamist groups, and which rights groups say is the most severe in recent memory.

Sisi’s backers say the crackdown was needed to stabilize Egypt after the turmoil that followed the country’s 2011 uprising. Sisi has dismissed allegations of corruption posted online by Mohamed Ali, a former contractor and actor, in the run-up to the protests.

Several hundred of those detained in the past week have been placed under investigation for charges including using social media to spread false news, undermining national security, joining a banned terrorist group, and protesting without a permit, defense lawyers say.