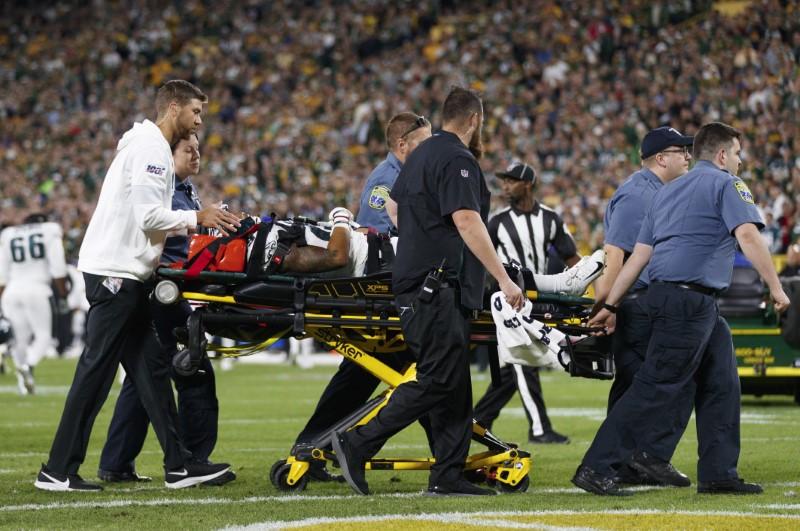 Sep 26, 2019; Green Bay, WI, USA; Philadelphia Eagles cornerback Avonte Maddox (29) is removed from the field on a stretcher after being injured during the fourth quarter against the Green Bay Packers at Lambeau Field. Mandatory Credit: Jeff Hanisch-USA TODAY Sports

Philadelphia cornerback Avonte Maddox, who was strapped to a backboard and stretchered off the field late in the Eagles’ win in Green Bay on Thursday night, was able to move his arms and legs, the teams said on social media after the game.

A tweet from the Eagles said that Maddox, who collided with teammate Andrew Sendejo as they were trying to defense a Green Bay pass play, was sent to a hospital for “precautionary reasons.”

Trailing 34-27 with under two minutes to play, the Packers’ Aaron Rodgers completed the pass to tight end Robert Tonyan at the Eagles’ 7-yard line. Tonyan ducked as he made the catch, and the two pursuing defenders collided.

Two plays later, however, on second-and-goal from the 3, the Eagles’ Craig James — who was on the practice squad a couple of days ago — broke up a pass to Marquez Valdes-Scantling, and linebacker Nigel Bradham made a saving interception.