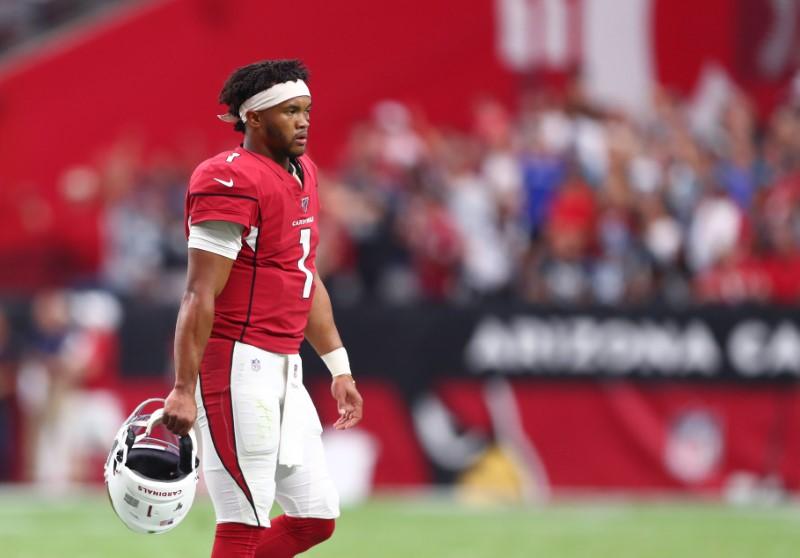 The Arizona Cardinals saw a lot of Russell Wilson while studying video of Kyler Murray before making him the first pick of the April draft. Now, let the on-field comparisons begin.

A week ago, Wilson threw for 406 yards and accounted for four touchdowns in a 33-27 home loss to the New Orleans Saints.

Murray has passed for 830 yards with four touchdowns and three interceptions and also has rushed for 86 in his first three games, but Seattle coach Pete Carroll said this was as a good a time as any to rev up the budding NFC West rivalry between quarterbacks of similar stature and gifts.

“His arc is going to be a steep one,” Carroll said, pointing his right arm upward while speaking of Murray. “He’s going to go. Numbers aren’t great yet, but he’s made a bunch of plays. He’s a handful. He’s loaded with talent. Great arm. Great release. Touch. And he can escape.

“The sooner you play him the better, because he’s going to get really good as he moves along.”

The Cardinals are in the infancy of first-year coach Kliff Kingsbury’s Air Raid offense, and the growing pains have shown. The 5-foot-10 Murray has been sacked 16 times — one fewer than Tennessee’s Marcus Mariota, whose total tops the league — and the Cardinals have leaned heavily on the air game, throwing 137 passes against 56 rushing attempts.

Wilson, listed at 5-foot-11, has thrown for 901 yards and seven touchdowns without an interception and also has rushed for 81 yards and two scores. He has 22 touchdowns and five interceptions in 14 games against Arizona, his best ratio against any NFC West foe.

Kingsbury said that he can see parallels between Murray and early-career Wilson, as the latter developed into a five-time Pro Bowler and a Super Bowl champion.

“With experience comes the ability to know when the play is over and throw it away,” Kingsbury told reporters this week. “‘I’m not taking a loss on this play.’ You watch Russ. He continuously makes the routine play over and over and gives his team a chance to win. They are never off schedule.

“You appreciate the fact that (Murray) wants to make every play and bring us back, but there are no 21-point touchdown passes. It’s just a learning curve that we are going through.”

Seattle is 7-4-1 in the past 12 meetings and has won five of the past six in Arizona, tying in 2016 when each team missed a field goal in overtime. The Cardinals are attempting to avoid their second straight winless start through four games after never having such a start since moving to Phoenix in 1988.

Carroll has made good use of the tight end in his offense, and Wilson has found a steady target in Will Dissly, who has 12 receptions and three touchdowns. Seattle fortified the position by bringing back Luke Willson this week.

The Cardinals have been burned in their first three games by tight ends T.J. Hockenson, Mark Andrews and Greg Olsen, who have combined for 20 receptions, 318 yards and four touchdowns.

Seahawks left tackle Duane Brown left the New Orleans game with a biceps strain but was trending toward playing. The Cardinals signed punter Ryan Winslow to the practice squad after three-time Pro Bowler Andy Lee sustained a hip flexor injury last week and did not practice Wednesday. Neither did wideout Damiere Byrd (hamstring.)