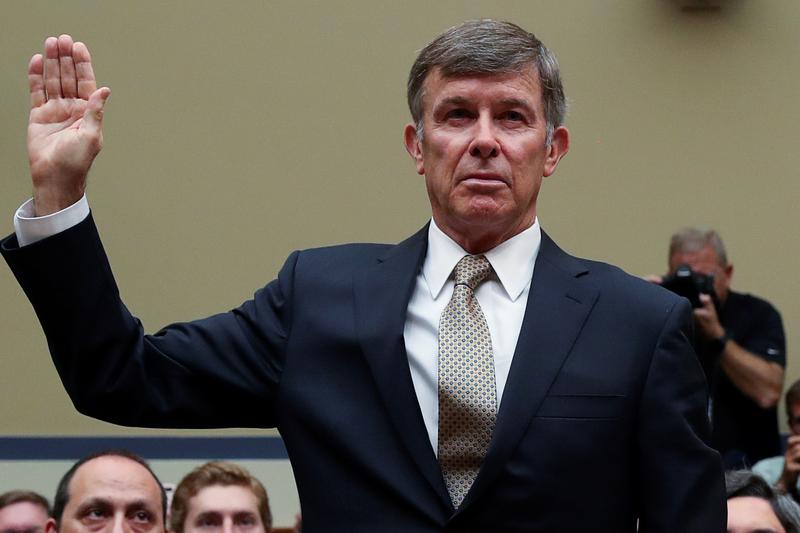 WASHINGTON (Reuters) – A whistleblower report released on Thursday said President Donald Trump not only abused his office in attempting to solicit Ukraine’s interference in the 2020 U.S. election for his own political benefit, but that the White House also tried to “lock down” evidence about that conduct.

The Democratic-led House of Representatives Intelligence Committee released a declassified version of the report, which had triggered a raging controversy and prompted House Speaker Nancy Pelosi to launch a formal impeachment inquiry into the Republican president. The report said Trump acted to advance his personal political interests, risking national security, and that White House officials intervened to shift evidence to a separate electronic system.

During a three-hour committee hearing held after the release of the document, the top U.S. intelligence official, Acting Director of National Intelligence Joseph Maguire, said the whistleblower had acted in good faith and followed the law in bringing the complaint.

Democrats have accused Trump of soliciting a foreign power to smear a domestic political rival. The Ukraine controversy follows U.S. intelligence conclusions that Russia interfered in the 2016 U.S. election with a campaign of hacking and propaganda to boost Trump’s candidacy.

“I am deeply concerned that the actions described below constitute ‘a serious or flagrant problem, abuse, or violation of law or executive order’ that ‘does not include differences of opinion concerning public policy matters,’ consistent with the definition of an ‘urgent concern’,” the whistleblower complaint, dated Aug. 12, said.

The call occurred after Trump had ordered a freeze of nearly $400 million in American aid to Ukraine, which the administration only later released. Before the call, Ukraine’s government was told that interaction between Zelenskiy and Trump depended on whether the Ukrainian leader would “play ball,” the whistleblower said.

Trump reacted with fury after the hearing and assailed Democrats for their impeachment inquiry.

“What … Democrats are doing to this country is a disgrace and it shouldn’t be allowed. There should be a way of stopping it, maybe legally through the courts,” Trump told reporters.

The identity of the whistleblower, a person within the U.S. intelligence community, has not been made public. In the report, the whistleblower said that “I was not a direct witness to most of the events described” and based the account on information from colleagues.

The New York Times and Los Angeles Times reported that Trump told staff from the U.S. mission to the United Nations he wanted to know who provided information to the whistleblower.

“I want to know who’s the person, who’s the person who gave the whistleblower the information. Because that’s close to a spy,” the Los Angeles Times quoted Trump as saying based on a recording of his remarks made by a person who attended the event in New York. “You know what we used to do in the old days when we were smart? Right? The spies and treason, we used to handle it a little differently than we do now.”

The New York Times, quoting three people familiar with his identity, is a CIA officer who at one time was detailed to work at the White House.

The whistleblower’s concerns did not end with Trump’s conversation with Zelenskiy. The next day, the report said, Special Representative for Ukraine Negotiations Kurt Volker and Ambassador to the European Union Gordon Sondland met with Zelenskiy and other Ukrainians and advised them “about how to ‘navigate’ the demands that the president had made of Mr Zelenskiy.”

Trump has repeatedly suggested wrongdoing by Biden and his son but has offered no evidence to back up the assertion. There has been no evidence that Biden used his position to help his son in the Ukraine matter.

The whistleblower complaint concerns a July 25 telephone call in which Trump pressed Zelenskiy to investigate Biden and his son Hunter, who had worked for a company drilling for gas in Ukraine.

The whistleblower report also said, citing multiple U.S. officials, that senior White House officials had intervened to “lock down” records of the call.

“Instead the transcript was loaded into a separate electronic system that is otherwise used to store and handle classified information of an especially sensitive nature,” the report said. “One White House official described this act as an abuse of this electronic system because the call did not contain anything remotely sensitive from a national security perspective.”

Pelosi referred to that claim at a news conference, saying, “The president has been engaged in a cover-up all along.”

The complaint stated that multiple U.S. officials said they were “deeply concerned by what they viewed as Mr. Giuliani’s circumvention of national security decision-making processes to engage with Ukrainian officials and relay messages back and forth between Kiev and the president.”

At the hearing, despite comments by Trump and other Republicans, Maguire said there was no reason to believe the whistleblower was disloyal to the United States or a political hack.

“I believe the whistleblower and the inspector general have acted in good faith throughout,” he said, also referring to intelligence community Inspector General Michael Atkinson, who determined that the whistleblower allegations appeared credible and were of urgent concern.

“I think the whistleblower did the right thing. I think he followed the law every step of the way,” Maguire said.

Maguire frustrated committee Democrats when he declined to say whether he had discussed the whistleblower complaint with Trump, though he said he spoke with the president often. Maguire would not weigh in on whether the whistleblower’s allegations merited investigation and said it would not be “appropriate” for him to publicly rebuke Trump’s attacks on the whistleblower.

Maguire testified about the document after refusing for weeks to share it with Congress. Democrats said federal law required that the report be sent to lawmakers.

“I have upheld my responsibility to follow the law every step of the way in the matter that is before us today,” Maguire testified. Under questioning, he acknowledged that this was the first time a whistleblower complaint was not shared with Congress.

Maguire said he had not immediately released the report out of concern for “executive privilege,” a legal doctrine protecting certain executive branch communications.

“I am not familiar with any prior instances where a whistleblower complaint touched on such complicated and sensitive issues including executive privilege,” Maguire said.

Maguire said he did not know who the whistleblower was and that he would work to ensure the individual’s anonymity is protected and that the individual not face retaliation.

“What you are seeing in the actions of this president is not democracy. It is the very negation of democracy,” Schiff said as he ended the hearing.

Representative Devin Nunes, a close Trump ally who is the committee’s top Republican, blasted Democrats for pursuing the matter, as well as media reports about the call and whistleblower report.

“I want to congratulate the Democrats on their latest information warfare effort against the president,” Nunes said sarcastically.

Saying more than six White House officials had made contact about Trump’s communication with Ukraine, the report cited concerns that efforts to put pressure on Ukraine “pose risks to U.S. national security,” undermining efforts “to deter and counter foreign interference in U.S. elections.”

The whistleblower complaint cited two instances that might have a connection with “the overall effort to pressure Ukrainian leadership.” The complaint stated that Trump instructed Vice President Mike Pence to cancel his trip to Ukraine to attend Zelenskiy’s inauguration in May, sending a lower-level Cabinet member instead.

The officials told the whistleblower it was “made clear” that Trump did not want to meet with Zelenskiy until he saw how he “chose to act.” The complaint also noted that Trump earlier that month had ordered suspension of all U.S. security assistance to Ukraine.

Schiff also said the committee expected to hear from the whistleblower and the intelligence community’s inspector general.

Maguire said the greatest challenge facing the intelligence community is protecting the integrity of elections, federal, state and local. He said it would be “unwarranted” and “unwelcome” to have outside interference in a U.S. election, adding, “No person in the country is beyond the reach of the law.”

Under the U.S. Constitution, the House has the power to impeach a president for “high crimes and misdemeanors.” No president has ever been removed from office through impeachment. Democrats control the House and Trump’s fellow Republicans control the Senate.

The United States has been giving military aid to Ukraine since Russia’s annexation of Crimea in 2014. The $391.5 million in aid at issue in the current controversy was approved by Congress to help Ukraine deal with an insurgency by Russian-backed separatists in the eastern part of the country.

The details of the July 25 call drew furious reactions from Democrats, who accused Trump of soliciting Ukraine’s help to smear Biden, who has led in polls among Democratic candidates seeking to challenge the Republican president in the November 2020 election.

The call occurred after Trump had ordered a freeze of the military aid. The whistleblower report said an official from the White House informed departments and agencies on July 18 that Trump had issued instructions to suspend all security assistance to Ukraine. Neither the White House budget office or National Security Council staff “knew why this instruction had been issued,” the report said.