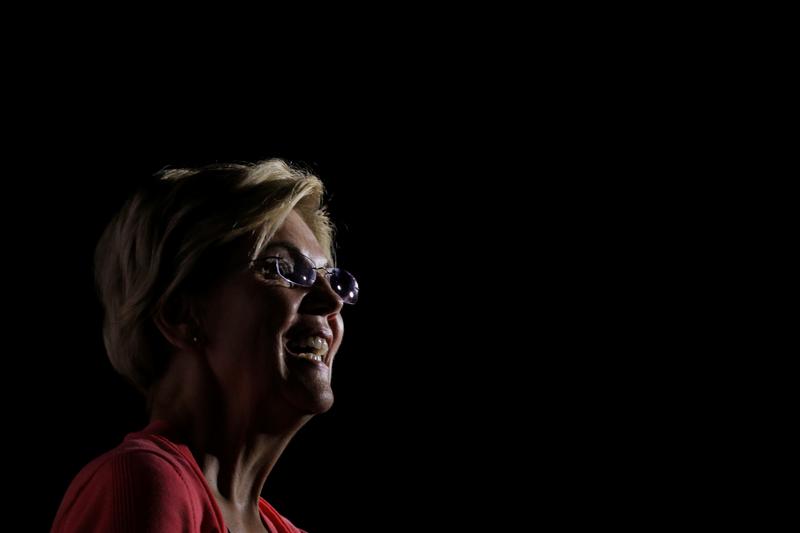 IOWA CITY, Iowa/NEW YORK (Reuters) – When U.S. Senator Elizabeth Warren jogged onstage at the University of Iowa last week for her largest rally yet in the state that hosts the first presidential nominating contest, college students cheered, wearing “Warren has a plan for that” t-shirts and waving “Persist!” signs.

According to Reuters/Ipsos polling, Warren is the only candidate for the 2020 Democratic nomination to consistently increase her level of support over the past six months. The latest poll, conducted Sept. 23-24, shows 14% of Democrats and independents support Warren, nearly triple her level in April and enough for second place behind former Vice President Joe Biden.

Though young and non-white Democratic and independent voters have largely favorable opinions of Warren, her support from these groups lags other candidates. This could be a hurdle when the nominating contests move from Iowa to more diverse states such as South Carolina and Nevada.

Interviews with more than a dozen voters in Iowa, which holds its caucuses on Feb. 3, revealed Warren’s appeal is both practical and personal. People said they liked her plans aimed at major structural change of the federal government, as well as her sincerity and smarts.

Susan Clark, 59, and her friend Amy Chastain, 43, said Warren’s rally at the University of Iowa in Iowa City was the first political event they have attended this cycle. Both said they supported U.S. Senator Bernie Sanders in his 2016 presidential bid but do not have him on their 2020 short list.

They came away from Warren’s event impressed. Clark found Warren genuine and said she set a high bar for other Democratic contenders.

“She has a lot of substance, which is nice to see,” Clark said.

As Warren went through her biography, Chastain said she kept thinking: “Get to the plans!” Eventually, Warren did highlight her proposals to combat climate change, tackle Washington corruption and implement a wealth tax to fund universal early childhood education and more.

“Policy-wise, I feel she’s the strongest so far,” Chastain said. “She’s cutting through the noise with actual plans.”

When the friends packed up to drive home, Warren remained onstage to take hundreds of photos with voters – interactions that have become a fixture of her events.

Later that night, her campaign announced Warren had posed for her 60,000th photo.

Eight in 10 Warren supporters said they were “completely certain” to vote in the presidential election, compared to 7 of 10 Biden supporters and 6 of 10 Sanders supporters. The findings suggest Warren may outperform her poll numbers in some nominating contests because her supporters are more likely to vote.

The poll also found Warren is now the most popular back-up choice among registered Democrats, with about 21% saying they would vote for her if their first choice dropped out, compared to 19% for Biden and 17% for Sanders. In May, just 12% said Warren would be their backup choice.

That could boost Warren in Iowa, whose caucus format favors candidates with highly engaged backers and second-choice appeal.

Warren’s campaign has invested heavily in Iowa. She has 65 paid staffers there and about a dozen field offices, putting her operation on par with those of fellow top-tier competitors.

Her campaign announced on Tuesday it was launching an eight-figure digital and television advertising campaign in Iowa, New Hampshire, Nevada and South Carolina, states with the first four nominating contests.

Warren won a convert at a house party last week in Mt. Vernon, Iowa: David Combs, 70, who attended with his wife, a Warren campaign volunteer.

Combs, who is white, said he ruled out Sanders and Biden because “I don’t want a couple of old white guys in the office anymore.” He had been considering U.S. Senator Kamala Harris of California but was wowed by Warren’s detailed plans.

“I’d been undecided up until this point, but the lucky thing for Iowans is you can see them talk, you have the opportunity to be there,” Combs said.

A Des Moines Register poll released on Saturday as Warren attended a Democratic party steak fry in Des Moines showed her ahead of Biden in the state for the first time, although her 22% support to his 20% was within the poll’s 4% margin of error. Sanders trailed at 11% support.

Before heading to Warren’s photo line at the steak fry, Bob Darr, 60, listened to her talk about how she would fix a rigged economic system and ensure billionaires pay their fair share.

“She’s smart as heck,” Darr said, adding he was “all in with Warren pretty early.”

Her remarks also impressed Bruce Grady, 71, a supporter of U.S. Senator Cory Booker, whose campaign said that day it needed to raise $1.7 million to stay in the race.

Grady said Biden represented “the old style of politics” and Sanders said “the exact same thing every day.” He liked Pete Buttigieg, the mayor of South Bend, Indiana, but knew Warren would be his second choice after Booker.

Reporting by Amanda Becker in Iowa and Chris Kahn in New York; Editing by Colleen Jenkins and David Gregorio