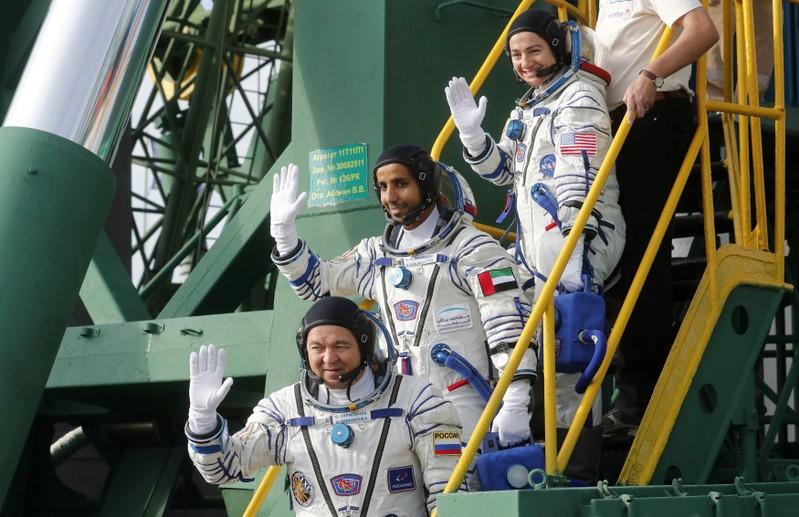 The International Space Station (ISS) crew members Jessica Meir of the U.S., Oleg Skripochka of Russia and Hazzaa Ali Almansoori of United Arab Emirates board the Soyuz MS-15 spacecraft for the launch at the Baikonur Cosmodrome, Kazakhstan September 25, 2019. Maxim Shipenkov/Pool via REUTERS

BAIKONUR COSMODROME, Kazakhstan (Reuters) – A Russian Soyuz spaceship blasted off from the Baikonur cosmodrome in Kazakhstan towards the International Space Station on Wednesday carrying a crew of three, including the first astronaut from the United Arab Emirates.

AlMansoori, 35, a former fighter jet pilot, will spend eight days aboard the station, becoming the first Arab to visit the giant scientific laboratory orbiting the Earth.

He plans to carry out a series of experiments, hold several live space-to-Earth sessions and host an Emirati food night wearing the traditional national clothing, the UAE authorities have said.

Hours before launch, AlMansoori together with crewmates received a blessing from a Russian orthodox priest in line with Russian space tradition, although unlike the two others he was spared from being sprinkled with holy water.

Smiling, AlMansoori made a Winston Churchill-style V hand sign while standing on the stairs leading to the elevator which took the crew to their capsule.

The new crew’s arrival will boost the ISS headcount to nine – for the first time in four years – until AlMansoori and two astronauts from a previous expedition return to earth on Oct.3.