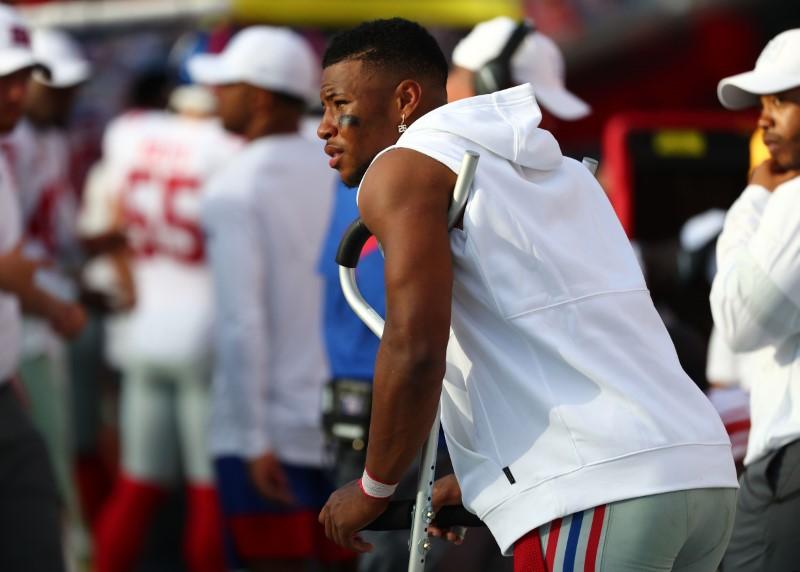 Barkley, the 2018 NFL Offensive Rookie of the Year, sustained a high ankle sprain Sunday in New York’s 32-31 win against the Tampa Bay Buccaneers.

He is expected to miss at least four to six weeks for rehabilitation, but Giants coach Pat Shurmur said the team is not planning to put him on injured reserve.

Barkley opened this season with back-to-back 100-yard games and has carried 37 times for 237 yards and one touchdown. He also has 11 catches for 74 yards.

—Los Angeles Chargers running back Melvin Gordon ended his 64-day contract holdout and reported to the team facility. He was set to undergo a physical exam before participating in practice.

Gordon is not expected to play Sunday when the Chargers (1-2) travel to Miami to face the Dolphins (0-3). The team reportedly will seek a two-game roster exemption to allow him to get into playing shape.

The 2015 first-round pick and two-time Pro Bowl selection desires a contract extension that will place him in the top tier among NFL running backs. He has amassed 5,205 yards from scrimmage and 38 touchdowns in his first four seasons.

—NFL owners reportedly are considering proposing a 17-game schedule and a reduction in preseason games — or elimination of the preseason altogether — as they continue work on a new collective bargaining agreement.

The league originally wanted an 18-game schedule, but according to a report by The Athletic’s Daniel Kaplan, they were told there was not enough support from owners or the NFL Players Association for two additional games.

ESPN’s Adam Schefter added that the union has said players don’t want an expanded regular season, particularly without getting a “significant increase” in their percentage of revenue generated by the games. The current CBA is set to expire after the 2020 season.

—Jennifer Lopez and Shakira will headline the halftime entertainment for Super Bowl LIV on Feb. 2 in Miami, the NFL announced.

The Super Bowl show will be the first produced by Jay-Z’s Roc Nation entertainment company, in conjunction with Pepsi. The NFL formed a partnership with Roc Nation in August, part of its Inspire Change initiative started in the wake of the controversy surrounding players, notably Colin Kaepernick, taking a knee during the national anthem at games.

According to Billboard, Rihanna rejected an offer to perform at the last Super Bowl in solidarity with Kaepernick. The quarterback hasn’t played in the NFL since 2016, the year he began protesting social issues by kneeling during the anthem.

—The MRI on Dallas Cowboys wide receiver Amari Cooper’s injured right ankle came back clean, and the team is “hopeful he’ll be ready to go as the week goes on,” coach Jason Garrett told reporters.

Cooper has been a limited practice participant this week as unbeaten Dallas prepares for a Sunday night game at New Orleans. Cooper caught six passes for 88 yards and two touchdowns last weekend in a 31-6 victory over Miami. He has 16 catches for 238 yards and is tied for the NFL lead with four touchdown grabs.

—Veteran linebacker Bruce Irvin is set to make his Carolina Panthers debut Sunday after missing the first three games due to a hamstring injury. Irvin was a limited participant in practice Thursday, but coach Ron Rivera said he expects him to play against the Houston Texans.

Irvin, 31, signed a one-year, $4 million contract with the Panthers in March after splitting last season with the Oakland Raiders and Atlanta Falcons.

A fifth-round pick in 2018, Phillips injured his left knee Sunday during the Bengals’ 21-17 defeat at Buffalo. McTyer, 24, was released by the Dolphins at final cuts and signed by the Chiefs on Sept. 2. He played in 22 games and registered 30 tackles with Miami during the 2017 and 2018 seasons.

—The NFL Referees Association is expected to finalize a new seven-year collective bargaining agreement with the league, ESPN reported. The current CBA does not expire until the spring of 2020, but both sides reportedly reached a tentative agreement on a new deal last week.

—The NFL named DraftKings the league’s first official daily fantasy sports partner, agreeing on a multiyear deal that allows the Boston-based company to use NFL logos, statistics, highlights and other content on its platforms. Dallas Cowboys owner Jerry Jones and New England Patriots owner Robert Kraft are both investors in DraftKings.