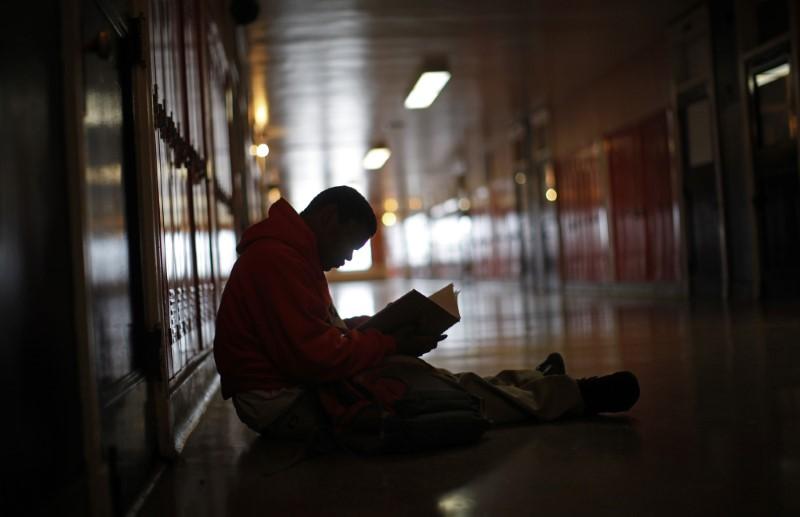 (Reuters) – Segregation in U.S. public education has concentrated black and Hispanic children into high-poverty schools with few resources, leading to an achievement gap between minority and white students, a nationwide study showed on Tuesday.

FILE PHOTO: A student at Leo Catholic High School sits in the hallway as he looks through a text book in Chicago, Illinois February 14, 2013. REUTERS/Jim Young

Stanford University Graduate School of Education professor Sean Reardon and his team crunched hundreds of millions of standardized test scores from every public school in the United States from 2008 to 2016 to reach their conclusions.

The findings reinforced previous studies illustrating that poverty, linked to continuing segregation, is a key mechanism accounting for racial disparities in academic achievement.

“If we want to improve educational opportunities and learning for students, we want to get them out of these schools of high-concentrated poverty,” Reardon said in presenting his findings at Stanford on Tuesday.

“Part of the reason why we have a big achievement gap is that minority students are concentrated in high-poverty schools, and those schools are the schools that seem systematically to provide lower educational opportunities,” he said.

African-American and Hispanic students tend to score lower on standardized tests than white students, and closing that achievement gap has posed a persistent challenge for educators.

The U.S. Supreme Court in its landmark 1954 decision in Brown v. Board of Education ruled that racial segregation was a violation of the equal protection clause of the U.S. Constitution’s 14th Amendment.

In the decades that followed, public education officials wrestled with how to integrate schools in the face of opposition by residents and politicians in many regions.

This history became a point of contention between Democratic presidential candidates during a televised debate in June, when U.S. Senator Kamala Harris criticized former Vice President Joe Biden for his 1970s opposition to court-ordered busing to reduce segregation.

In a working paper released on Monday, Reardon and his team compared different levels of racial disparities between schools in New York City and those in Fulton County, Georgia, to explain how segregation affected student performance.

By comparison, the average black student attended a school with a poverty rate 52 percentage points higher than the average white student’s school in Fulton County, where an achievement gap of four grade levels separated black and white students.

Gary Orfield, co-director of the Civil Rights Project at the University of California, Los Angeles and not affiliated with the Stanford study, endorsed the methodology Reardon’s team used but said its findings reveal only part of the picture.

“It’s really misleading to talk about whether race or poverty is most important, because a lot of the poverty is caused by race, and that’s something that people need to keep in mind,” Orfield said.

For instance, discrimination against minority parents is a factor in why those families are more likely to struggle with poverty, Orfield said by telephone.

The Stanford research data is publicly available at the website edopportunity.org.