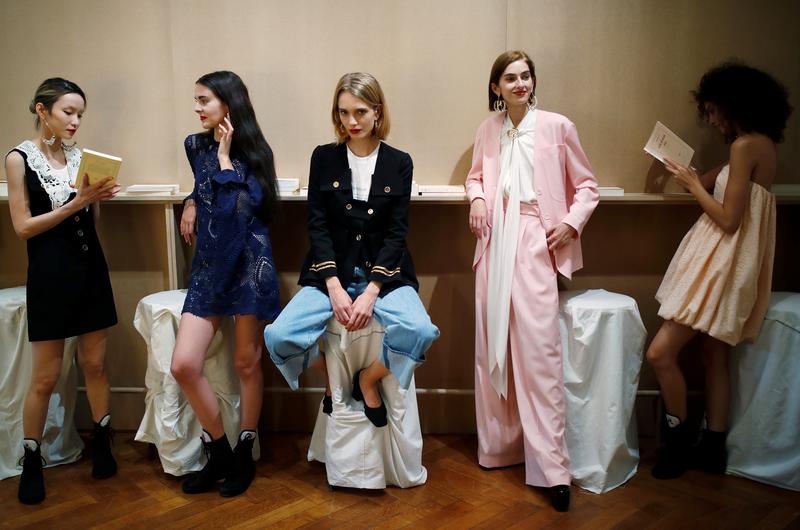 PARIS (Reuters) – French couture house Patou came back to life on Wednesday under the helm of LVMH, its new parent company, and designer Guillaume Henry, who gave a modern, chic twist to its historical designs at a Paris Fashion Week presentation.

Patou’s office, a typical Haussmannian apartment a stone’s throw from Notre-Dame Cathedral, was turned into a showroom where clients and journalists got a glimpse of the brand’s first fashion collection since it closed its doors in 1987.

Instead of a catwalk, models stood around, artificially idle as they chatted or read books, showcasing dresses with lace trimmings, Navy-style officer jackets and wide denim jeans.

Accessories included oversized handmade golden jewels, as well as tight-fitting bathing caps and black boxing boots which evoked the sportswear style of the Patou of old, which once dressed tennis player Suzanne Lenglen.

Henry described the laid-back but chic vibe of the collection as “sunny.”

“The Patou woman is an approachable woman,” he told Reuters.

It tasked Henry, who previously worked at Carven and Nina Ricci, with breathing new life into its forgotten pret-a-porter lines, which the late Karl Lagerfeld as well as designers Jean Paul Gaultier and Christian Lacroix once worked on.

Patou, created in 1914 by its eponymous founder, was still best known for its rich floral perfume “Joy,” launched in the 1930s and the most expensive fragrance of its time.

“A year ago, Patou was a project without an address, without archives, without material, without anything,” Henry said. “It was necessary to set up a company, a century-old company.”

“A lot of people don’t know Patou so we don’t want to bring back a brand with its patrimonial or historical background but to see it with a new perspective.”

Patou is targeting a wide audience, with prices in the bottom bracket of the luxury world with dresses varying between 450 euros ($492) and 5,000 euros for the most expensive. On average, a dress costs 650 euros.

Reporting by Laetitia Volga in Paris; Editing by Sarah White and Matthew Lewis