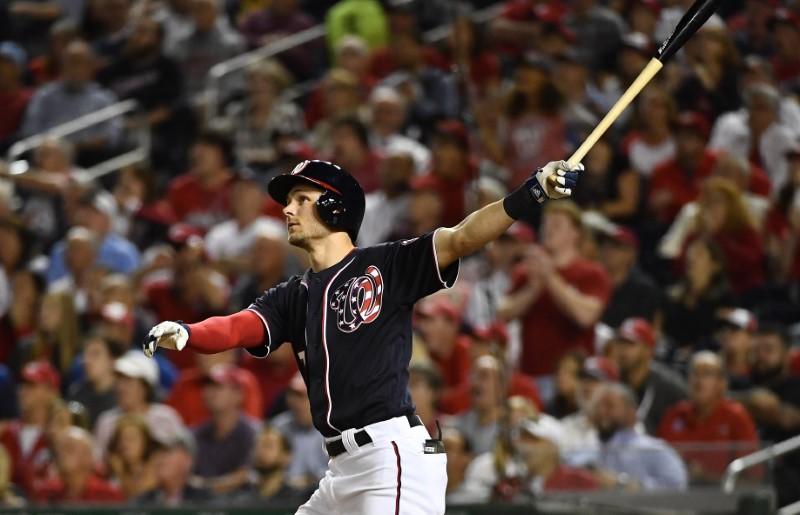 Trea Turner hit a sixth-inning grand slam, and the Washington Nationals rallied past the Philadelphia Phillies 6-5 on Tuesday night, sweeping a doubleheader and clinching a National League playoff berth.

Washington entered the nightcap with its magic number at two. When Daniel Hudson retired the Phillies in the ninth for his second save of the day, the Nationals stayed on the field. Minutes later, the Pittsburgh Pirates defeated the Chicago Cubs 9-2, and Washington was celebrating being back in the playoffs after a one-year absence.

Yan Gomes also homered for the Nationals, who lead the Milwaukee Brewers by one game for home-field advantage in the wild-card game.

Turner had three hits in the first game, a 4-1 Washington win. The Phillies were eliminated from playoff contention with the defeat in the opener.

Gerrit Cole pitched seven shutout innings on a historic night as Houston continued its mastery of host Seattle and moved 1 1/2 games ahead of the New York Yankees in the race for the best record in the majors and home-field advantage throughout the playoffs.

Cole (19-5) allowed only two hits and struck out 14 without issuing a walk. He matched his career high for victories set in 2015 with Pittsburgh and surpassed the Astros’ franchise record for single-season strikeouts (313), set by J.R. Richard in 1978. Cole now has a major-league-leading 316 strikeouts.

Alex Bregman hit his 40th home run of the season for the Astros, who are 17-1 against Seattle this season. Ryan Pressly struck out three in the eighth inning, and Roberto Osuna pitched the ninth for his 37th save.

With the victory, the Dodgers are now assured of finishing the regular season with the best overall record in the National League.

Los Angeles took a 5-0 lead before San Diego scored three times in the fifth. Hill, who was wearing a brace to protect his left knee, worked two innings, as expected. He allowed no runs and no hits while compiling five strikeouts against two walks. Kenley Jansen pitched a scoreless ninth to pick up his 31st save.

Ji-Man Choi homered to lead off the 12th inning and Tampa Bay defeated New York in St. Petersburg, Fla., to remain a half-game ahead of Cleveland for the second wild-card spot.

The Rays earned their 18th win in 24 games when Choi lifted a 2-2 slider from Cory Gearrin (1-3) over the right-field fence. It was Choi’s 18th homer and second career walk-off homer.

Yankees third baseman Gio Urshela exited in the seventh after being hit in the left hand an inning earlier. He remained in the game to run the bases after being hit, and then played a half-inning on defense at third before being substituted.

Dillon Peters (4-3) tossed five innings of two-run ball, getting help from four relievers who combined to shut out the A’s over the final four innings. Hansel Robles pitched the ninth for his 23rd save.

Oakland has lost two in a row for the first time since Aug. 31-Sept. 1. The Athletics’ lead in the three-team race for the two American League wild cards was reduced to just a half-game over the Rays and one game over the Indians.

Ryan Braun belted a solo homer among his two hits as visiting Milwaukee inched closer to a postseason berth with a victory over Cincinnati.

Yasmani Grandal ripped an RBI double and rookie Keston Hiura added a sacrifice fly in a two-run third inning for the Brewers, who won for the 16th time in their past 18 contests and moved five games ahead of the Chicago Cubs for the final National League wild-card spot.

Josh Hader struck out Kyle Farmer with runners on second and third base in the ninth to secure his 36th save of the season. The Brewers posted their fifth consecutive victory.

Willians Astudillo and Eddie Rosario each had two-run hits in a four-run seventh inning, and Minnesota inched closer to its first American League Central title in nine years with a victory at Detroit.

The Twins, who improved to 12-5 against Detroit this season, lowered their magic number for clinching the division to two.

Jake Odorizzi (15-7) held the Tigers to one run on two hits and a walk while striking out seven in six innings. He was removed after 93 pitches due to hamstring tightness. Taylor Rogers got the last three outs for his 29th save.

Jose Ramirez belted a grand slam and a three-run home run in his return to the lineup from injury and Mike Clevinger pitched seven shutout innings for visiting Cleveland. The Indians remained one-half game behind the Tampa Bay Rays for the second American League wild-card spot.

Clevinger improved to 13-3 while earning his first win against the White Sox this season, scattering five hits, one walk and 10 strikeouts in seven innings. In three starts versus Chicago in 2019, Clevinger has yielded two earned runs in 21 innings, a 0.86 ERA.

Brandon Nimmo drew a bases-loaded walk in the 11th inning as New York mounted a late comeback and stayed alive in the National League wild-card race with a win over visiting Miami.

Had the Mets lost, they would have been eliminated by virtue of their defeat and wins earlier in the day by Washington and Milwaukee. New York will be eliminated from contention with one more loss or one more win by the Brewers.

J.D. Martinez had two hits and three RBIs to back a laboring Eduardo Rodriguez in his 19th win as Boston held off Texas at Arlington, Texas.

Xander Bogaerts and Jackie Bradley Jr. each drove in a pair for the Red Sox. Rodriguez (19-6) battled to get through the minimum five innings to earn the victory, allowing a season-high seven runs on 11 hits and three walks with six strikeouts.

Brandon Workman picked up his 16th save for the Red Sox, who ensured themselves a winning season. Rougned Odor and Scott Heineman each had three RBIs for the Rangers, who ensured a losing campaign.

Not only did the Braves lose for the third time in as many meetings with the 100-loss Royals, but they also saw 41-homer man Ronald Acuna Jr. leave due to right hip tightness.

Danny Duffy (7-6) got the win for Kansas City after allowing three runs and five hits over five innings, walking two and striking out five. Julio Teheran (10-11) lasted just 2 1/3 innings, allowing six hits and six runs with one walk and one strikeout for Atlanta.

Kevin Kramer hit a two-run double and Adam Frazier had two hits and an RBI in a seven-run seventh inning as Pittsburgh routed visiting Chicago.

Erik Gonzalez added a two-run homer for Pittsburgh. Nico Hoerner drove in both runs for the Cubs, who committed five errors, including two in the Pirates’ big seventh and two by Hoerner.

Bundy (7-14) allowed two runs, three hits and two walks while striking out six as the Orioles gained a split of the first two games of the three-game series.

Mancini extended his hit streak to a season-best 11 games, hitting .522 in that stretch (24-for-46). Derek Fisher homered for the Blue Jays.