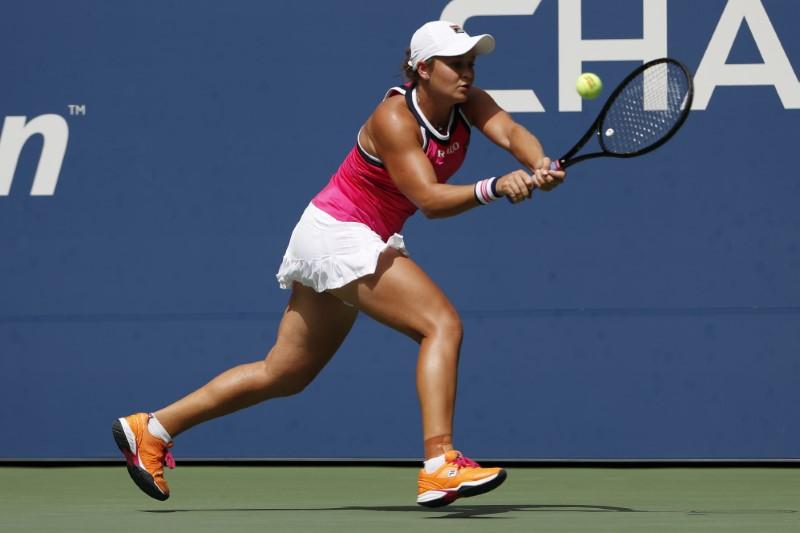 (Reuters) – World number one Ash Barty fended off a late comeback attempt by American Sofia Kenin to reach the Wuhan Open quarter-finals on Wednesday, while second seed Karolina Pliskova was knocked out in straight sets by Ukrainian teenager Dayana Yastremska.

After cruising through the first set without any trouble, Barty fought back from a break down in the next, saving two set points to overcome Kenin 6-3 7-5 for her third win over the 20-year-old Guangzhou champion in four meetings this season.

Next up for the Australian top seed will be Croatia’s Petra Martic who defeated qualifier Veronika Kudermetova 6-3 6-1.

World number two Pliskova’s hopes of dethroning Barty as world number one by the end of the week ended with a 6-1 6-4 defeat by Yastremska.

The unseeded 19-year-old did not drop serve and smashed 26 winners past her Czech opponent for the first top 10 victory of her career.

Yastremska next faces another Czech top 10 opponent in Petra Kvitova, who advanced to the quarter-finals with a 6-3 6-3 victory over Sloane Stephens — her first win over the former U.S. Open champion.

Wimbledon champion Simona Halep was forced to retire from her match against wildcard Elena Rybakina while trailing 5-4 in the first set after feeling sharp pain in her back.

The Romanian had suffered a herniated disk late last year which ruled her out of the season-ending WTA Finals.

“It’s a lower back (injury). I think it’s more muscle, but I don’t know yet because I didn’t check it properly,” the fourth seed told reporters.

“At four-all, 0-30, with the backhand… I had a sharp pain. I don’t know yet (if it is the same as the previous injury). It looks a little bit different but it’s still the same zone.”

Ukraine’s Elina Svitolina beat Russia’s Svetlana Kuznetsova 6-4 6-2 to stay on course to qualify for the season-ending WTA Finals in Shenzhen where she will bid to retain her title.

Reporting by Shrivathsa Sridhar and Rohith Nair in Bengaluru; Editing by Ken Ferris and Pritha Sarkar