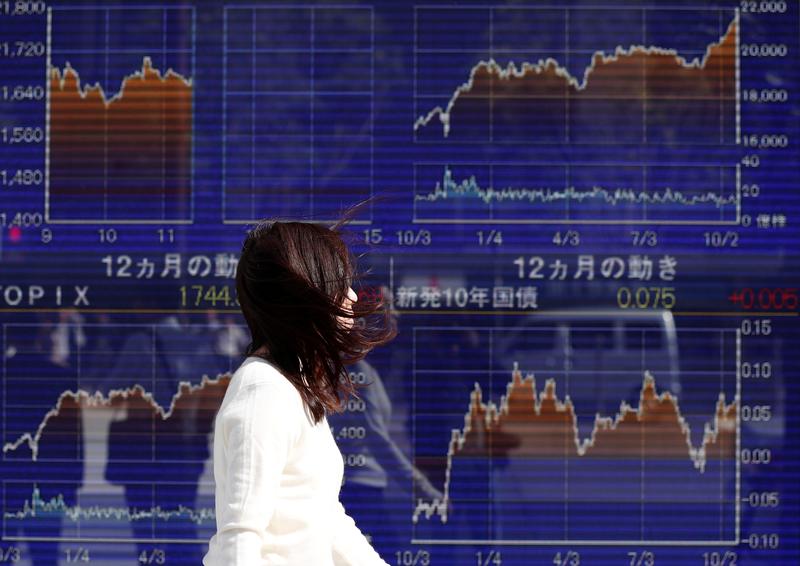 FILE PHOTO: A woman walks in strong wind caused by Typhoon Lan, past an electronic board showing the graphs of the recent movements of Japan’s Nikkei average outside a brokerage in Tokyo, Japan, October 23, 2017. REUTERS/Issei Kato/File Photo

Chinese shares slumped and oil futures extended declines after Trump harshly criticized Beijing’s trade practices in a speech at the United Nations, damping hopes for a resolution to the U.S.-China trade war.

The dollar nursed losses against most major currencies as the inquiry sets the stage for a fierce battle between Democrats and Trump’s Republican Party over whether the president sought foreign influence to smear a political rival.

U.S. stock futures,, rose 0.06% in Asia on Wednesday, but the mild gains are unlikely to improve sentiment for Asian shares.

The push for an impeachment inquiry and disappointing U.S. economic data weighed on Wall Street on Tuesday, pushing the S&P 500 0.84% lower, its biggest daily decline in a month.

The U.S. House of Representatives will launch a formal impeachment inquiry over whether Trump sought help from the Ukraine to smear former Vice President Joe Biden, a front-runner for the 2020 Democratic presidential nomination. Trump has denied the claims.

It is unlikely that the impeachment inquiry would lead to Trump’s removal from office. Even if the Democratic-controlled House voted to impeach Trump, the Republican-majority Senate would have to take the next step of removing him from office after a trial.

However, the development injects fresh uncertainty into financial markets, which have already been heavily jostled by emerging global political risks in recent years.

“If an impeachment enquiry looks like ending his re-election chances in 2020, he may throw caution to the wind and harden his attitude to a China trade deal, increasing the chances of a global recession next year,” said Jeffrey Halley, Senior Market Analyst, Asia Pacific, OANDA.

The dollar index measuring the greenback against a basket of six major currencies was little changed after falling 0.3% on Tuesday.

Trump said on Tuesday Beijing had failed to keep promises it made when China joined the World Trade Organization in 2001 and was engaging in predatory practices that had cost millions of jobs in the United States and other countries.

The U.S.-China trade war, which has dragged on for more than a year, has added pressure on China’s already slowing economy and has increased the risk of recession in other countries. Slower global growth would hurt demand for energy and other commodities.

Sterling traded at $1.2473, down 0.2%, having trimmed some of its overnight gains made following the UK court ruling.

In response to the UK Supreme Court’s decision, Johnson said he disagreed and vowed that Britain would leave the EU by Oct. 31 deadline, come what may.

Calls for Johnson’s resignation could grow, which would cast even more uncertainty over how the UK would complete its divorce from the EU.