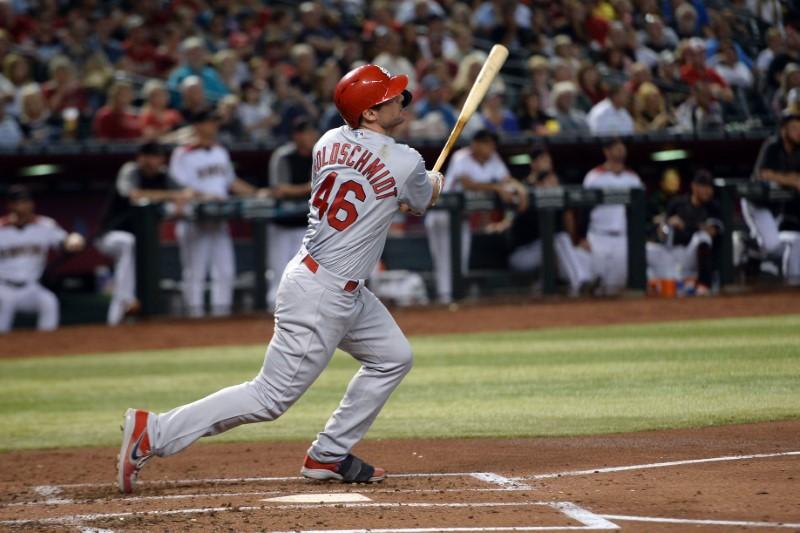 Paul Goldschmidt had two hits, including his 32nd homer, in his return to Arizona, and Yadier Molina homered and drove in four runs in the St. Louis Cardinals’ 9-7 victory over the Diamondbacks on Monday in Phoenix.

Tommy Edman had two hits, including a home run, and Harrison Bader also homered for the Cardinals, who moved 3 1/2 games ahead of the Milwaukee Brewers in the National League Central with five games remaining. The loss eliminated Arizona from wild-card contention.

Christian Walker had three hits, including his 27th homer, Josh Rojas had two hits, and Nick Ahmed homered for the Diamondbacks. Walker took over at first base this season for Goldschmidt, who was a fixture there in his eight seasons with Arizona.

The Diamondbacks played a video tribute of Goldschmidt before the game, his first at Chase Field after being traded last winter, and he received a standing ovation before his first plate appearance. In the third inning, he became the first player to collect 100 career homers in Phoenix, hitting a two-run shot.

Patrick Corbin pitched six solid innings for the Nationals, whose magic number to clinch a playoff berth is three. They lead the idle Milwaukee Brewers by one-half game in the race for the top National League wild card. The Phillies saw their tragic number for playoff elimination slip to one.

Eaton had three hits, and Turner and Gomes had two each. Juan Soto drew four walks for Washington.

Corbin (14-7) has won four of his last five starts. He allowed one run on three hits while striking out six and walking four. Philadelphia starter Zach Eflin (9-13) gave up five runs on eight hits in five innings with four walks and two strikeouts.

Ji-Man Choi and Brandon Lowe also homered in the fourth as the Rays came back from an early four-run deficit to win the finale of the four-game series. With the victory, Tampa Bay moved a half-game ahead of the idle Cleveland Indians for the second American League wild card while closing within 1 1/2 games of idle the Oakland A’s for the first wild card.

Jackie Bradley Jr. had three hits for the Red Sox, and J.D. Martinez notched his 100th RBI of the season.

Amed Rosario hit a grand slam for the Mets, and J.D. Davis had three hits.

Anthony Alford hit his first career major league home run with two outs in the bottom of the 15th inning to give host Toronto a walk-off win over Baltimore. The game was tied 9-9 after nine innings, and both teams scored in the 12th.

Chris Davis hit his 12th home run, a solo shot, with two outs in the top of the 12th, before the Blue Jays tied it at 10-10 in the bottom of the inning on Jonathan Davis’ sacrifice fly.

Down two in the bottom of the ninth, the Blue Jays got a sacrifice fly from Cavan Biggio and RBI single from Vladimir Guerrero Jr. against Shawn Armstrong to tie the game with two outs.