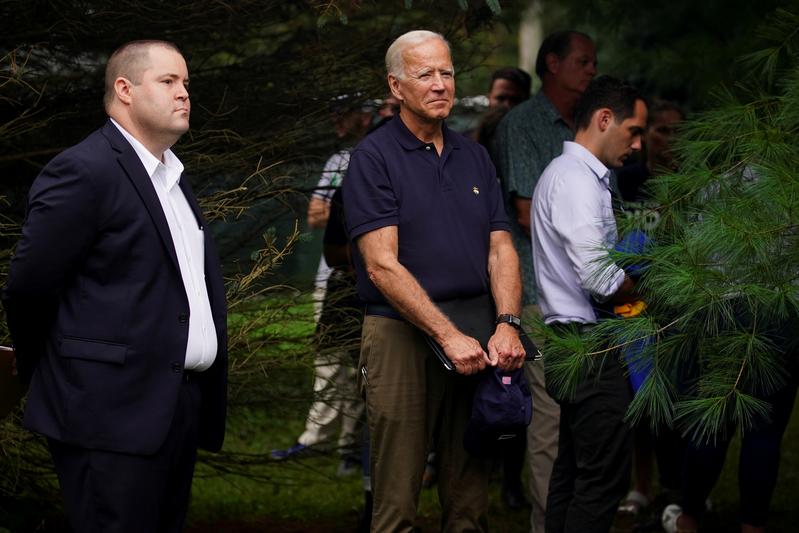 Biden, the former vice president, has become ensnared in the political furor over reports that Trump pressured the Ukrainian president to investigate Biden and his son, an issue that has intensified Democratic calls for Trump’s impeachment.

While Trump admits he discussed Biden with Ukrainian President Volodymyr Zelenskiy in a July phone call, he has deflected questions about it and focused instead on raising unfounded charges that Biden improperly tried to halt a Ukrainian probe of a company with ties to his son, Hunter.

“Joe Biden and his son are corrupt,” Trump told reporters on Monday when asked about the controversy on the sidelines of the United Nations General Assembly meetings in New York. He did not provide any evidence.

In the short term, the uproar has given Biden and his campaign a chance to portray Trump’s strategy as evidence the president sees him as the likely winner, and most dangerous opponent, among the 19 candidates seeking the Democratic nomination to face him in the November 2020 election.

But in the long term, Biden’s candidacy and perceptions of his electability could be hurt by the possibility that Trump’s repeated charges of corruption could stick to Biden and undercut Democratic arguments about Trump’s abuses of power.

“If there is one thing Donald Trump can do well, it’s label and isolate a message that is memorable. He’s a salesman,” said Joel Payne, a Democratic strategist who worked for Hillary Clinton in 2016.

“He’s trying to create this corruption, D.C. insider storyline about Biden,” he said. “It allows him to dust off the play-book and run the same campaign against Biden that he ran against Clinton.”

The Republican National Committee on Monday sent reporters a memo headlined “Quid Pro Joe,” trying to make the case that Biden had a history of “swampy dealings.”

In a Democratic race driven heavily by voter perceptions of electability and each contender’s perceived chances of beating Trump, that could help turn what has been a strength for Biden into a potential liability.

But Democratic voters will automatically discount most of what Trump says, said Patrick Murray, a pollster at Monmouth University. What could be more telling, he said, is Biden’s response.

HOW DOES HE FIGHT BACK?

“That’s where the electability question comes in. Does Biden have what it takes to fight back when Donald Trump throws a punch? It could certainly help Biden,” Murray said.

Biden and his campaign seemed to take that sentiment to heart. After a hesitant response when the story first broke on Friday, they kicked in later with a furious reaction, with Biden telling reporters that Trump knows “I’ll beat him like a drum.”

Even in an increasingly contentious Democratic nominating race, however, his presidential rivals are unlikely to criticize Biden over Ukraine for fear of standing on the same side as Donald Trump.

“First of all, I don’t think we should give Trump the power to change the subject from him doing something as nefarious as what he did,” Democratic contender Pete Buttigieg, the mayor of South Bend, Indiana, told reporters in Iowa on Monday.

“Secondly, I haven’t seen any evidence of anything there anyway. And third, we have to remember that he will either find a vulnerability or make one up,” he said of Trump.

Most of the other Democratic candidates have not weighed in on the controversy, although U.S. Senator Elizabeth Warren referenced it over the weekend in Iowa while renewing her call for Trump’s impeachment.

“He has solicited another foreign government to attack our election system. It is time for us to call out this illegal behavior and start impeachment proceedings right now,” Warren said.

Trump’s lawyer Rudy Giuliani has suggested that Biden improperly used his influence to get Ukraine to dismiss its top prosecutor, who was investigating Hunter Biden’s business dealings but had also been criticized by the U.S. government and the European Union for larger issues. Biden and his son have denied the charge.

Giuliani seemed happy on Monday to see the question of Biden and Ukraine front and center in the news.