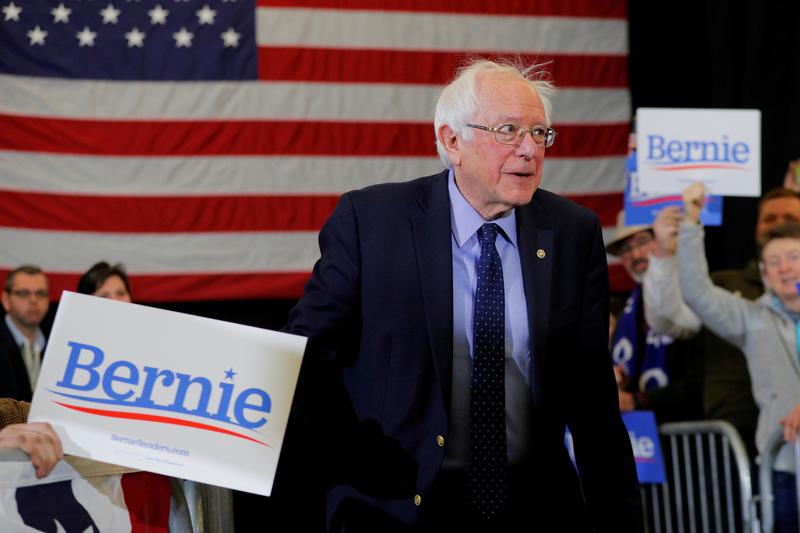 WASHINGTON (Reuters) – U.S. presidential contender Bernie Sanders released a plan on Tuesday to tax fortunes worth more than $32 million, in a move that follows his Democratic rival Elizabeth Warren’s own wealth-tax proposal.

Sanders, a U.S. senator from Vermont, said his “extreme wealth tax” would address historically high levels of inequality and fund his healthcare plan, known as Medicare for All, as well as plans for affordable housing and universal childcare.

“Enough is enough. We are going to take on the billionaire class, substantially reduce wealth inequality in America and stop our democracy from turning into a corrupt oligarchy,” Sanders said in a statement.

Sanders, one of 19 Democratic candidates hoping to challenge Republican President Donald Trump in the November 2020 election, is calling for a dramatic economic restructuring that would limit corporate influence and level the economic playing field.

Fellow progressive Warren, who has overtaken Sanders in some recent opinion polls, has gained momentum via rallies where crowds chant: “Two cents!” – a reference to her own wealth-tax plan on those with more than $50 million.

Sanders said his proposed tax would begin at 1% for those with a net worth above $32 million and rise in increments to 8% on wealth over $10 billion, hitting the wealthiest 180,000 Americans, Sanders said.

Like many of Sanders’ proposals, a tax on wealth would require approval from Congress. The Senate, if it stays in Republican hands after next year’s elections, would be almost certain to oppose a wealth tax, and there is an open debate over whether it is even constitutional.

Sanders’ campaign distributed a letter from Gabriel Zucman and Emmanuel Saez, professors of economics at the University of California at Berkeley, who analyzed the plan and estimated it would raise about $4.35 trillion over a decade. The pair wrote a similar letter in January in support of Warren’s wealth-tax proposal.

Some governments, including France, have in the past abandoned wealth taxes after they found they were difficult to administer and sometimes led to the wealthy leaving the country.

To prevent evasion of the tax, Sanders said he would create a national wealth registry, bolster reporting requirements and foreign account rules, and increase funding for the Internal Revenue Service in order to audit all billionaires.