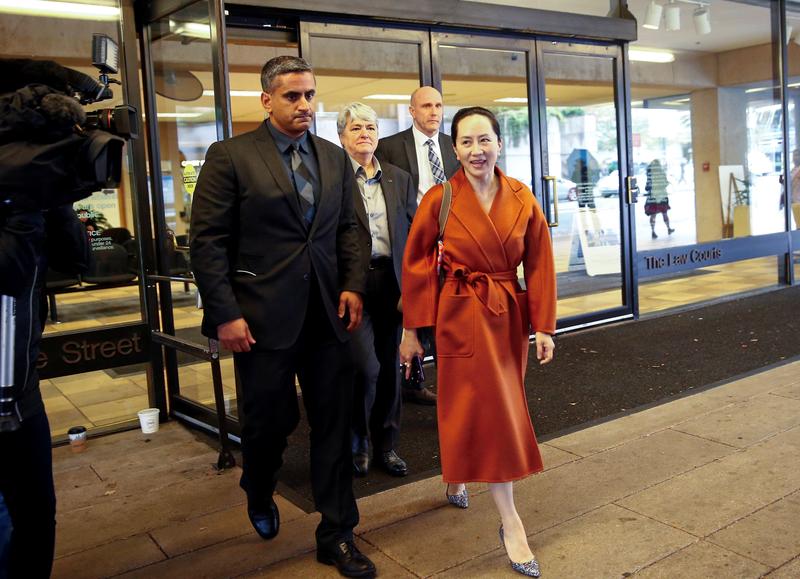 VANCOUVER (Reuters) – There is no evidence Canadian border officials or police acted improperly when Huawei Chief Financial Officer Meng Wanzhou was detained and arrested at Vancouver’s airport nearly 10 months ago, the attorney general of Canada said in a filing released on Monday.

The filing was made available as Meng and her lawyers were in British Columbia Supreme Court in Vancouver arguing for additional disclosure surrounding the arrest, including contacts between U.S. and Canadian authorities. The defense claims Meng was unlawfully searched and questioned under the ruse of an immigration check and is seeking a halt to extradition proceedings.

Meng, 47, was detained at Vancouver’s airport on Dec. 1 at the request of the United States, where she is charged with bank fraud and accused of misleading HSBC Holdings Plc about Huawei Technologies Co Ltd’s business in Iran. She has said she is innocent and is fighting extradition.

The disclosure hearing is scheduled through Wednesday this week and to resume on Sept. 30 for another five days. Meng’s extradition hearing is not scheduled to start until January.

“There is no evidence that the conduct of officials, either Canadian or foreign, has compromised the fairness of the extradition proceedings,” Canada’s attorney general said through counsel in the filing.

“No purpose would be served in providing further disclosure,” the attorney general said, adding that her lawyers have not shown her claims could justify halting extradition proceedings.

The defense had already been provided with extensive disclosure, the filing said, including handwritten notes from police and border officers, and video footage from the airport.

The arrest has strained China’s relations with both the United States and Canada. Shortly after the arrest, Beijing detained Michael Kovrig, a former diplomat, and Michael Spavor, a businessman, and later charged them with espionage. China has also blocked imports of Canadian canola seed and meat.

Huawei, the world’s largest telecommunications equipment maker, has been accused by the United States of activities contrary to national security or foreign policy interests. It is also a defendant in the U.S. case against Meng. Huawei denies the charges.

At Monday’s hearing before Justice Heather Holmes, Meng lawyer Richard Peck said the Canadian border agency and police delayed implementing Meng’s rights and the border agency was given an opportunity to interrogate her, with plans to share the information with the Canadian police and the Federal Bureau of Investigation (FBI).

“We refer to this as a ‘covert criminal investigation’ under the pretext of an admissibility examination for immigration purposes,” Peck said.

The attorney general of Canada said in the filing that the border officers acted pursuant to “lawful authority to determine whether the applicant and her goods were admissible to Canada.”

The government said there’s no legal reason an arrest warrant must be executed before a person goes through immigration and customs, and that there was nothing wrong with border agency and foreign law enforcement officials sharing information about people of interest to the agency. They said Meng’s legal team was on a “fishing expedition.”

Meng arrived at the Vancouver court on Monday in a burned orange coat, an electronic monitor on her left ankle above glittery silver shoes. She sat in the well of the courtroom next to an interpreter, wearing a bright purple dress and with her hair pulled back with a black velvet bow.

Meng’s lawyers have said after landing from a flight from Hong Kong, she was detained, searched and questioned for three hours by border officials before she was arrested. They also argue there were omissions in Canadian officers’ notes, including of a meeting between police and border officers the morning Meng was due to arrive.

Peck also said the U.S. made it a priority to seize Meng’s electronic devices, including phones, which a Canadian border officer took and then gave to a Canadian police constable. He told the judge U.S. authorities have a history of using and misusing immigration and border control powers to investigate.

Extradition proceedings against Meng should be halted if officials abused the process, her lawyers say. Besides accusations of misconduct related to her detention, they argue the United States is using Meng for economic and political gain, noting that after her arrest, U.S. President Donald Trump said he would intervene if it would help close a trade deal.

Asked by Reuters how she felt when court adjourned on Monday, Meng said, “Good. Thank you.”

Meng, the daughter of Huawei founder Ren Zhengfei, spent 10 days in jail in December but was then released on C$10 million ($7.5 million) bail and is living in one of her two multimillion-dollar homes in Vancouver.

U.S. and Chinese officials resumed trade talks last week, as the world’s two largest economies try to negotiate a way out of their 14-month trade war.