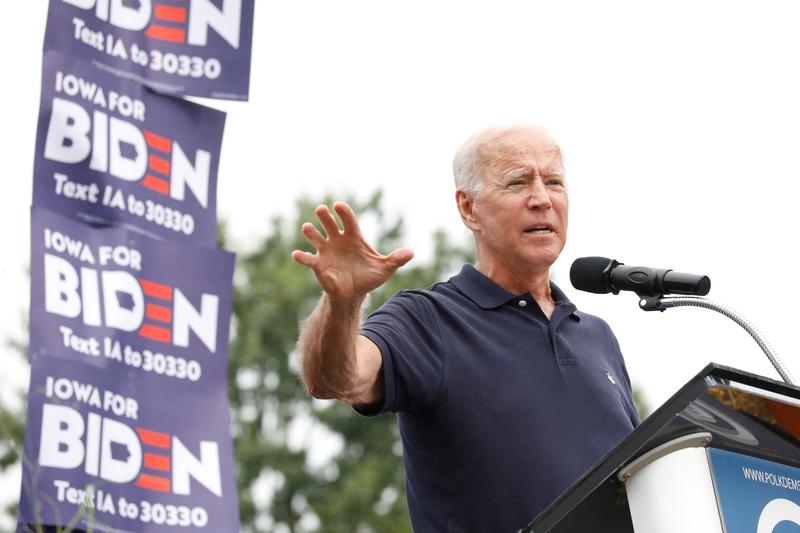 WILMINGTON, Del. (Reuters) – Democratic presidential front-runner Joe Biden said on Tuesday he would support opening impeachment proceedings against Donald Trump if the Republican president fails to comply with congressional requests for information on Ukraine and other matters.

Biden, the former vice president, has become swept up in a political furor over reports that Trump pressured the Ukrainian president to investigate Biden and his son, an issue that has intensified Democratic calls for Trump’s impeachment.

Congressional Democrats have sought information related to Trump’s July phone call with Ukrainian President Volodymyr Zelenskiy, and Biden said it was time for Trump to “stop stonewalling” and cooperate.

“If he continues to obstruct Congress and flout the law, Donald Trump will leave Congress in my view with no choice but to initiate impeachment proceedings,” Biden told reporters in Wilmington, in his home state of Delaware.

“That would be a tragedy, but a tragedy of his own making,” he said.

Trump has acknowledged he discussed Biden in the July 25 call, but denies he withheld nearly $400 million in U.S. aid to Ukraine as leverage to get Zelenskiy to launch a probe that would damage Biden.

Trump promised on Tuesday to release “the complete, fully declassified and unredacted” transcript of his call.

Democrats are also seeking the original complaint about Trump’s call, filed by a whistleblower within the U.S. intelligence community, as well as information on deliberations over the Ukrainian aid.

Biden, who leads polls in the Democratic race to pick a challenger to Trump in the November 2020 election, has said before that impeachment might be necessary if Trump refused to cooperate with ongoing investigations.

But the statement on Tuesday was the first time he has made the call since the controversy over Ukraine surfaced last week.

“The House must impeach,” Warren, the first major contender to call for impeachment in the wake of Special Counsel Robert Mueller’s report into Russian interference in the 2016 election, wrote on Twitter on Tuesday.

The Washington Post reported that House of Representatives Speaker Nancy Pelosi would announce a formal impeachment inquiry later in the day. Pelosi is scheduled to make a public statement at 5 p.m. ET (2100 GMT).

During an appearance at an event sponsored by The Atlantic magazine, Pelosi declined to say what action she planned, but told the audience, “It’s absolutely, absolutely essential that the president be held accountable. No one is above the law.”

Trump on Monday said he did not try to coerce Zelenskiy to launch a corruption investigation into Biden and his son in return for the U.S. military aid. Trump has produced no evidence of wrongdoing by Biden or his son.

In remarks to reporters over the intensifying controversy, Trump indicated there was nothing sinister about withholding the aid but that he wanted Europe and not just the United States to step up and provide Ukraine assistance.

But Trump also has called Biden and his son, Hunter, “corrupt” without providing any evidence.

Trump’s lawyer Rudy Giuliani has suggested Biden improperly used his influence to get Ukraine to dismiss its top prosecutor, who was investigating Hunter Biden’s business dealings. The prosecutor had also been criticized by the U.S. government and the European Union for larger issues.

Biden and his son have denied the charge.