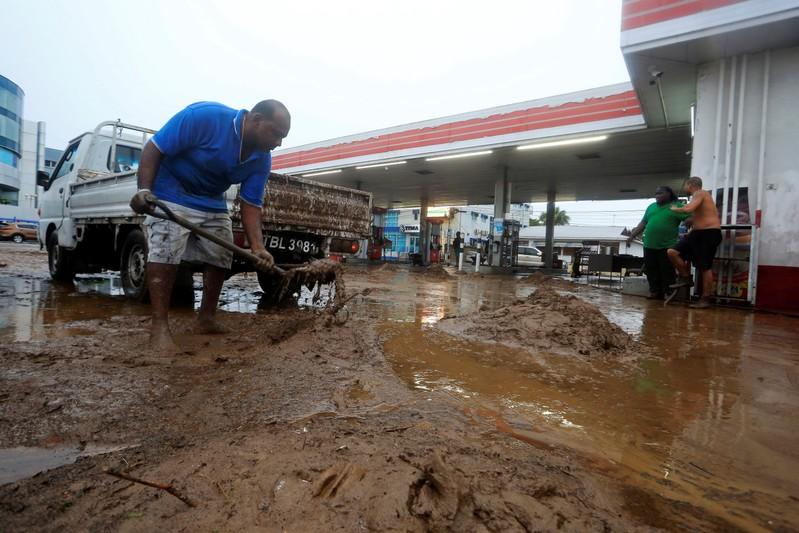 (Reuters) – Tropical Storm Karen showed signs of weakening on Monday as it churned closer to Puerto Rico, but the system is still likely to bring heavy rains to the U.S. island territory this week, forecasters said.

Karen, with sustained top winds of 40 miles per hour (65 kph), is expected to pass near or over Puerto Rico and the Virgin Islands on Tuesday morning, the U.S. National Hurricane Center (NHC) in Miami reported.

Although Karen may degenerate into a tropical depression or tropical wave by then, little overall change in wind speed is expected over the next day or so, the NHC said.

Tropical storm warnings remained in effect for Puerto Rico, as well as the adjacent U.S. and British Virgin Islands for the next 24 hours. Parts of Puerto Rico could receive up to 8 inches of rain from Karen, enough to possibly trigger flash floods and mudslides, according to the latest NHC advisory.

Still the advisory headline read: “Karen barely hanging on as a tropical cyclone.”

Karen, the 11th named storm of the 2019 Atlantic hurricane season, formed on Sunday afternoon east of the Lesser Antilles.

Puerto Rico, beset with financial woes and political turmoil, was spared a potential new disaster last month when Hurricane Dorian skirted past the island before laying waste to the northern Bahamas.

Two years ago, Puerto Rico was still recovering from Hurricane Irma when it took a direct hit from Hurricane Maria, which obliterated large swaths of the territory and left much of the island without electricity for months. Some 3,000 people perished in that storm, the deadliest in the island’s history.

To the north of Karen, a separate Atlantic tropical storm named Jerry was on track to skirt by Bermuda Tuesday night or Wednesday morning. Jerry was packing maximum sustained winds of 65 mph (100 kph) but was also expected to gradually weaken.

Yet a third tropical storm, Lorenzo, formed on Monday in the far eastern Atlantic near the Cape Verde Islands, off Africa. Lorenzo was forecast to reach hurricane strength by Wednesday about halfway across the ocean but posed no immediate threat to land, the NHC said.

(This story removes extra word in paragraph one)