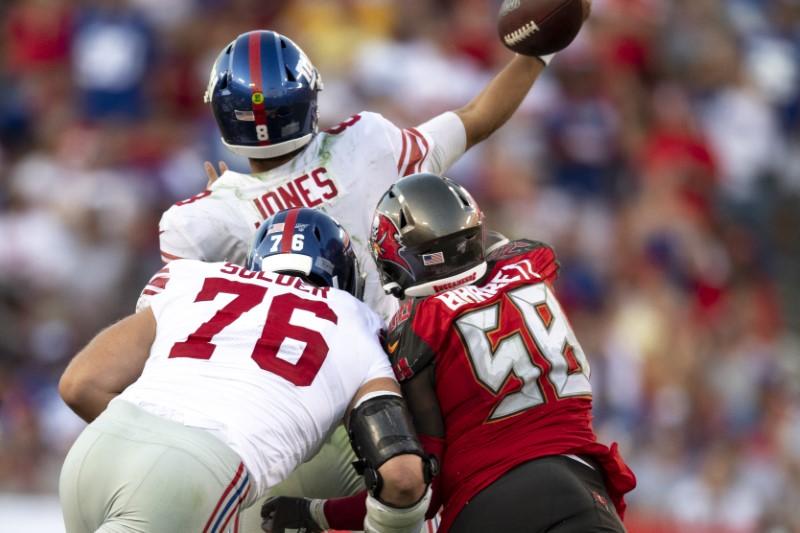 Matt Gay missed a 34-yard field goal as time expired to seal the victory for New York (1-2). Gay had made four previous field goals but had missed two extra points, one of which was blocked.

Jones completed 23 of 36 passes for 336 yards and two touchdowns, plus two scores on the ground. He was 5 of 7 on the go-ahead drive that covered 75 yards and ended with his 7-yard rushing score with 1:16 remaining to put the Giants up for the first time all day. Jones was the team’s leading rusher with 28 yards.

Barkley, who hurt his ankle in the second quarter when tackled awkwardly by safety Mike Edwards, had to be helped off the field. The running back — who had eight carries for 10 yards — was later seen on the sidelines with a walking boot and using crutches.

The 300-yard passing performance was the 13th for Mahomes in 20 career starts. Ravens quarterback Lamar Jackson completed 22 of 43 passes for 267 yards and rushed for a 9-yard touchdown with 2:01 remaining, but his two-point rush failed.

A 14-yard pass to LeSean McCoy with 2:07 left in the third quarter resulted in the Chiefs’ last touchdown as Mahomes went 27 of 37. Tight end Travis Kelce topped the Chiefs with seven receptions, while Darrel Williams had 62 of the team’s 140 rushing yards.

Quarterback Tom Brady threw for 306 yards and two touchdowns while passing Drew Brees for second place in career touchdown passes, and New England continued its early-season roll with a victory over New York in Foxborough, Mass.

Brady was 28-of-42 passing and threw first-half touchdown passes to Phillip Dorsett and Julian Edelman, giving him 524 career touchdown passes, two more than Brees in league history and trailing only Peyton Manning (539). Brees is expected to miss another five weeks or more with a thumb injury.

Sony Michel and Rex Burkhead had rushing touchdowns for the Patriots, who threatened an NFL record for fewest points allowed in the first three games of the season before Jamal Adams intercepted a Jarrett Stidham pass and went 61 yards for a touchdown with 6:23 remaining.

Dak Prescott passed for 246 yards and two touchdowns and ran for a third TD as Dallas rolled past hapless Miami in Arlington, Texas and remained undefeated.

Both of Prescott’s scoring passes went to Amari Cooper, who led the Cowboys with six catches for 88 yards. Ezekiel Elliott ran for 125 yards on 19 carries, and Tony Pollard added 103 yards and a touchdown on 13 carries as Dallas recorded its first back-to-back games with 200 yards rushing since 2009.

Josh Rosen, who was acquired in the offseason after starting 13 games last season for Arizona, started for the first time for the Dolphins and passed for 200 yards. He was sacked three times by the Cowboys, who entered the game with just two sacks in their first two games.

Aaron Rodgers threw for 235 yards and one touchdown as Green Bay beat visiting Denver in a battle of first-year head coaches and Super Bowl-winning quarterbacks.

The Packers improved to 3-0 under coach Matt LaFleur, while the Broncos fell to 0-3 under Vic Fangio. Denver’s Joe Flacco threw for 213 yards but tossed one interception and was sacked six times.

The Broncos controlled the ball for more than 35 minutes and ran 21 more plays. Six of their first nine possessions reached Green Bay’s side of the field. Their final possession in Green Bay territory came late in the fourth quarter, with Denver trailing by 11. The Packers got a turnover on downs when outside linebacker Preston Smith made his third sack of the game.

Brissett completed 28 of 37 passes, including an 11-yard strike to Jack Doyle in the final two minutes for a first down to the Atlanta 16 that sealed the outcome. The Colts also got 74 yards and a touchdown on 16 carries from Marlon Mack, who provided the Colts’ final score, running 4 yards with 8:40 left to lead 27-17.

The Falcons drew back within a field goal on Matt Ryan’s 10-yard touchdown pass to Julio Jones with 4:11 left, but never saw the ball again.

Matthew Stafford completed 18 of 32 passes for 201 yards and one touchdown, and Detroit remained unbeaten with a victory at Philadelphia.

Wide receiver Marvin Jones Jr. had six receptions for 101 yards and one touchdown as the Lions improved to 2-0-1. Eagles quarterback Carson Wentz was 19 of 36 for 259 yards and two touchdowns to Nelson Agholor, but Philadelphia fell to 1-2.

The Eagles had one last chance to win when Malcolm Jenkins blocked a 46-yard field-goal attempt by Matt Prater just inside the two-minute warning. Wentz connected with running back Darren Sproles on fourth-and-5 for a 25-yard strike to get to the Lions’ 20, but Sproles was called for pass interference to negate the play.

Watson escaped the grasp of Melvin Ingram and hit Akins for a 53-yard scoring play with 9:40 left in the fourth quarter to make it 27-17. The Texans missed the PAT.

The Chargers had appeared to stop the Texans’ drive five plays earlier on Rayshawn Jenkins’ interception, but the turnover was nullified by offsetting penalties, including a facemask infraction on Desmond King. Los Angeles’ 14-play, 60-yard drive in the final minutes ended when Philip Rivers’ fourth-and-14 pass fell incomplete.

Minnesota got rushing touchdowns from three different players and totaled 211 yards on the ground in bulldozing visiting Oakland in Minneapolis.

Adam Thielen scored twice, once on a pass from Kirk Cousins, and the Vikings’ defense harassed Derek Carr into four sacks and an interception in the most lopsided game in 38 years in the 16-game all-time series between the Super Bowl XI combatants.

Dalvin Cook rushed for 110 yards and a second-quarter touchdown, and also caught four passes for 33 yards. He went over 100 yards rushing for the third straight game, a feat last accomplished by a Viking when Adrian Peterson did it in 2015.

Jimmy Garoppolo’s 5-yard touchdown pass to Dante Pettis with 1:15 left boosted the error-prone San Francisco to a 3-0 start as it rallied past winless Pittsburgh in Santa Clara, Calif.

Garoppolo completed 23 of 32 passes for 277 yards with two interceptions. The Niners won despite making five turnovers and committing 71 yards worth of penalties.

Bridgewater was making his second NFL start since the 2015 season as he fills in for Brees. The former Pro Bowl quarterback completed 19 of 27 passes for 177 yards. He hit running back Alvin Kamara on a 29-yard touchdown late in the second quarter and wide receiver Michael Thomas from 1 yard out in the third.

The Saints’ defense and special teams each contributed a touchdown as New Orleans improved to 2-1. It was just the third time in Saints history that the team scored a touchdown in all three phases in the same game.

Allen, who made his first start of the season and second of his career, was filling in for injured Cam Newton (foot). For Allen, who is from Arizona, it was a happy homecoming as he completed 19 of 26 passes for 261 yards.

For Arizona quarterback Kyler Murray and first-year coach Kliff Kingsbury, they’ll have to wait to produce their first NFL victory. The Cardinals are 0-2-1. Murray finished 30-for-43 passing for 173 yards with two touchdowns and two interceptions, taking eight sacks.

Frank Gore scored on a 1-yard run with 1:50 remaining to give Buffalo a victory over visiting Cincinnati in its home opener.

After Gore’s touchdown, the Bengals mounted a drive in the final minute to Buffalo’s 28-yard line, but Tre’Davious White intercepted a pass by Bengals quarterback Andy Dalton at the 10-yard line to end the game. Buffalo is 3-0 for the first time since 2008.