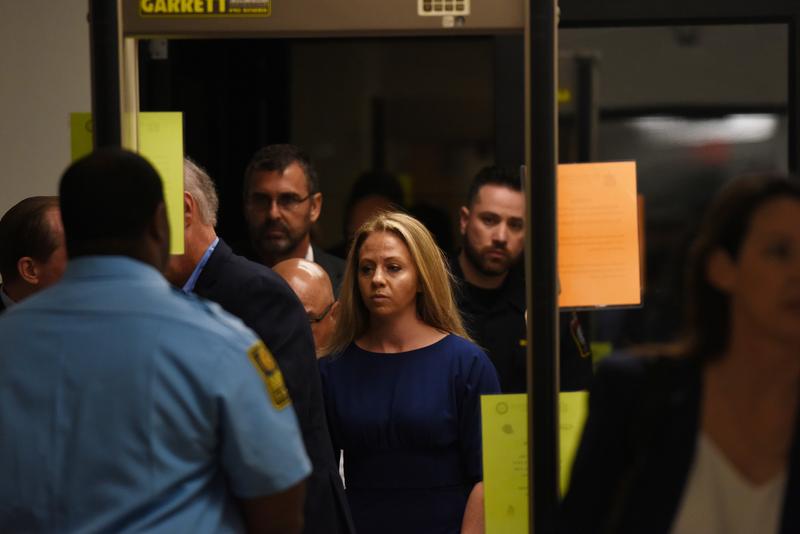 DALLAS (Reuters) – A judge on Monday took the rare step of sequestering the jury in the murder trial of a former off-duty Dallas police officer charged with shooting and killing a black neighbor last year after the officer entered his apartment by mistake.

Amber Guyger, who is charged in the killing of Botham Jean in his own home, arrives on the first day of the trial in Dallas, Texas, U.S., September 23, 2019. REUTERS/Jeremy Lock

Former officer Amber Guyger, who is white, has told investigators in Texas that she mistook Botham Jean, 26, for a burglar intruder after she mistakenly entered his central Dallas apartment one floor above hers and he appeared in the darkness.

The shooting, one of a series of high-profile killings of unarmed black men and teens by white U.S. police, sparked street protests, particularly because prosecutors initially moved to charge Guyger, 31, with manslaughter, a charge for killing without malice that carries a lesser sentence than murder.

In contrast to high-profile cases like the killings of Michael Brown in Missouri and Philando Castile in Minnesota, Guyger shot Jean, a PwC accountant who was a native of the Caribbean island nation of Saint Lucia, while she was off duty, rather than while responding to a reported crime.

Before opening statements were to begin on Monday afternoon, state District Judge Tammy Kemp sequestered the jury of four men and 12 women for the entirety of the trial, shielding them from possible outside influence and local news coverage of the case.

U.S. judges have moved away from sequestering juries because jurors find the isolation stressful, and it may increase the likelihood of jurors dropping out, raising the chances of a mistrial, legal experts say. Some jurists also fear sequestration may cause jurors to rush their deliberations.

Sequestration is most common when there is heavy media coverage and heightened public interest.

Kemp also denied a motion to exclude evidence from Guyger’s texts and phone calls and a motion for a mistrial from Guyger’s attorneys who claimed Dallas District Attorney John Creuzot defied a gag order by giving an interview about the case to a local television station over the weekend.

District Attorney Jason Hermus said he plans to display a photo of Jean in the courtroom as prosecutors make their case to show that he was “a living, breathing human being prior to this event.”

The district attorney’s office reexamined the case after the public protests, and a grand jury in late November indicted the former police officer on murder charges, with the maximum punishment of life in prison. reut.rs/2mxclAB

Guyger, who had been on the force for over four years, walked into Jean’s apartment after returning from a work shift and was able to enter because Jean’s door was slightly ajar, according to Texas law enforcement officials. reut.rs/2l65UEq

After the incident, she was initially placed on administrative leave but was fired days later.

Guyger’s defense had pushed for a change of venue, arguing in court last week that media coverage had been so intense their defendant could not get a fair trial, but Kemp denied that request.