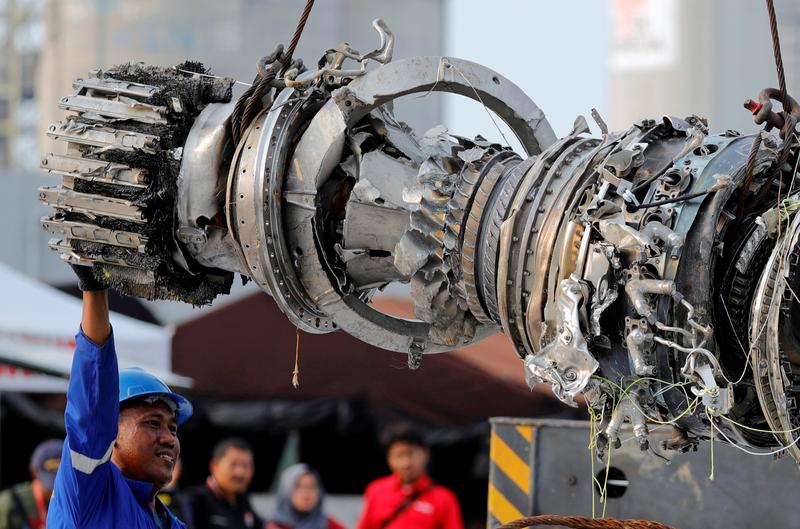 (Reuters) – Indonesian investigators have found that design and oversight lapses played a key role in the October crash of Boeing Co’s (BA.N) 737 MAX jet that killed all 189 aboard, the Wall Street Journal said on Sunday.

FILE PHOTO: A worker assists his colleague during the lifting of a turbine engine of the Lion Air flight JT610 jet, at Tanjung Priok port in Jakarta, Indonesia, November 4, 2018. REUTERS/Beawiharta

The draft conclusions, expected to be the first formal government finding of flaws in the design and U.S. regulatory approval, also identify a string of pilot errors and maintenance mistakes as causal factors of the Lion Air crash, the WSJ here said.

The plane has been grounded since March in the aftermath of two fatal crashes in five months.

A Boeing spokesman did not comment on the newspaper report but said the plane maker continued to offer support to the investigating authorities as they complete their report.

Around month-end, the U.S. National Transportation Safety Board (NTSB) is expected to call for improvements to cockpit training and crew decision making and focus on potential changes to certification of new airliners, WSJ said.

The NTSB declined to comment on the WSJ report but said it planned to release recommendations on the FAA’s certification program sometime in September.

The FAA welcomed the scrutiny from safety experts and looked forward to their findings, it said in a statement.

“We continue to work with other international aviation safety regulators and will carefully consider all recommendations,” it added. “The FAA will incorporate any changes that would improve our certification activities.”

Reporting by Rishika Chatterjee in Bengaluru and David Shepardson in Washington; Editing by Lisa Shumaker and Clarence Fernandez