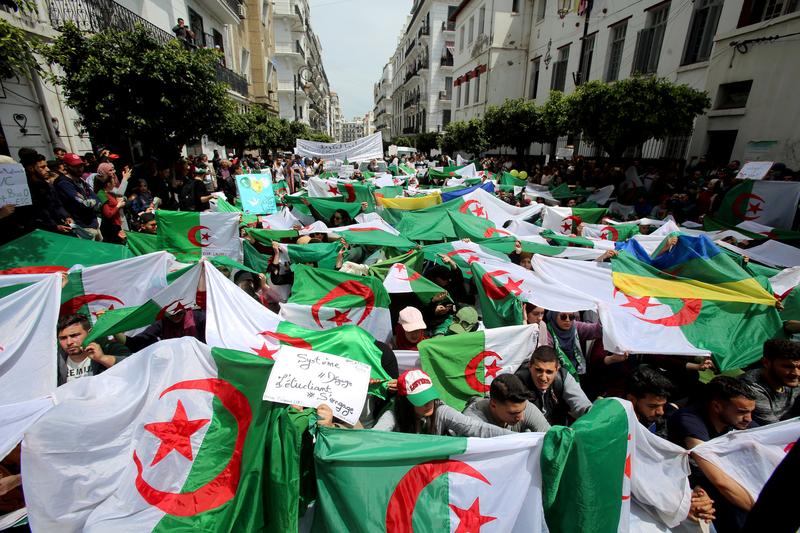 ALGIERS (Reuters) – Algeria’s one-time kingmaker and intelligence chief went on trial on Monday along with his successor and a brother of the ousted president for “conspiring against the army”, state radio reported.

Mohamed Mediene, Bachir Tertag and Said Bouteflika were arrested this spring as the authorities grappled with mass protests demanding that Algeria’s entrenched ruling elite let go their grasp on power.

The Supreme Court also on Monday put former transport and public works minister Boudjemaa Talai in custody, state media reported, making him the 11th former minister to be detained on corruption allegations since the protests broke out.

The trials are closed to non-state media and none of the accused have made public comments about the allegations.

The protests forced president Abdelaziz Bouteflika to step down in April and caused a delay in elections planned for July, leaving the army as Algeria’s most important force.

Protesters continue to demand a more thorough purge of the old guard of rulers, and that the military step back from politics, though a new election has been set for December.

The government has meanwhile stepped up pressure on protesters, who say the election will not be fair if the ruling elite is still in place, with more police at demonstrations and arrests of opposition figures.

State radio reported that the trial of the three men, along with that of the head of the Workers’ Party, Louisa Hannoune, had opened at the Blida military court 50km (30 miles) south of the capital.

Mediene was intelligence chief from 1991 to 2015, a period encompassing an eight-year uprising by Islamist militants that killed 200,000 people and raised his domestic security force to an unparalleled position of power.

Widely known by his nickname Tewfik, he for two decades had the last say on appointing presidents, ministers and even national football team coaches, former officials say.

However, no Algerian had seen a photograph of him until a few years ago, when he was pictured attending a funeral after Bouteflika had sacked him in 2015 and replaced him with Tertag.

“Nobody knows who Tewfik really is. A ghost, a UFO…” a retired general said.

Said Bouteflika had become Algeria’s de facto ruler during the past five years after his brother suffered a stroke in 2013, a period that coincided with the intelligence service losing some of its influence. He had tried to seek a fifth presidential term for his older brother.

Army chief Lieutenant General Ahmed Gaed Salah has since emerged as the key figure in the deadlock between the authorities and protesters, pushing for the election that has been declared for this year.