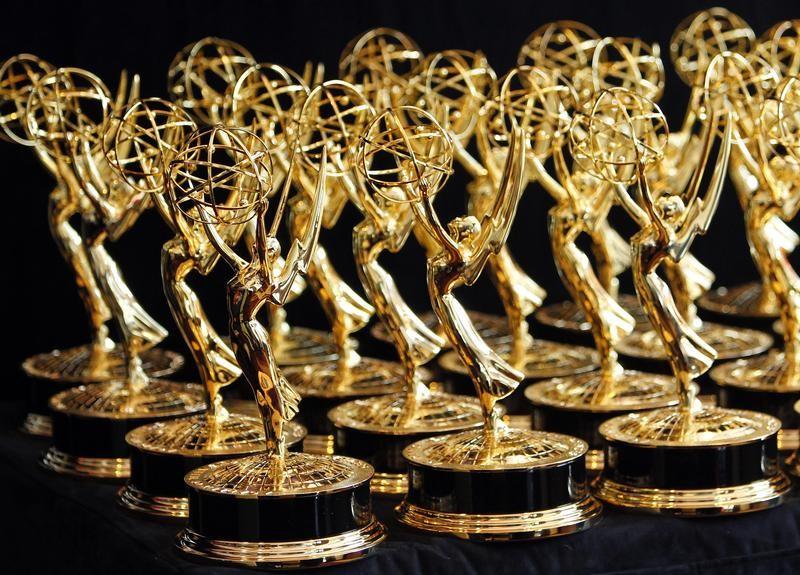 LOS ANGELES (Reuters) – “Game of Thrones” looks set to crown its final season with another best drama series Emmy on Sunday despite an array of new contenders jostling for the most prestigious awards in television.

FILE PHOTO – Dozens of Emmy Awards are lined up on the trophy table in the media center at the 62nd annual Primetime Emmy Awards in Los Angeles, California August 29, 2010. REUTERS/Danny Moloshok

On a night that could see old favorites prevailing over the biggest lineup of first-time nominees in eight years, HBO political satire “Veep” and returning Emmy champ “The Marvelous Mrs Maisel” from Amazon Studios, along with their stars Julia Louis-Dreyfus and Rachel Brosnahan, are seen as frontrunners in the contest for best comedy series.

Unless, that is, British comedian Phoebe Waller-Bridge can pull off an upset with one or both of her buzzy shows – female-driven BBC America thriller “Killing Eve” and Amazon comedy “Fleabag,” which drew 20 Emmy nominations between them.

“I think it’s a tight race,” said Louis-Dreyfus, who is competing for her seventh lead actress Emmy in her role as a nakedly ambitious politician hell-bent on becoming U.S. president in “Veep.”

“It’s a very, very, very fine group of actors and shows. There’s no getting around it. Really, truthfully, I can’t believe how good television is right now,” Louis-Dreyfus told Reuters.

The 71st Emmy awards show, chosen by members of the Television Academy, will be broadcast live on Fox, starting at 8 p.m. EDT/5 p.m. PDT (midnight GMT).

Already the most-awarded series in Emmy history with 38 wins, “Game of Thrones” landed a record 32 nominations for its final season, including nine for its actors, despite a fan uproar over the conclusion of the medieval fantasy series.

The haul for “Game of Thrones” helped cable channel HBO lead all comers with 137 Emmy nominations this year, ahead of Netflix with 117, reflecting the battle for dominance between traditional outlets and streaming services.

“It’s a great year for diversity on all levels. There are hot new shows competing against Emmy incumbents, so there will be a lot at stake in an industry that is undergoing a revolution,” said Tom O’Neil, founder of awards website GoldDerby.com.

None of the “Game of Thrones” actresses has ever won an Emmy, and this year they face formidable competition from “Killing Eve” co-stars Sandra Oh and Jodie Comer as well as Laura Linney for drug-trafficking thriller “Ozark.”

One of the closest races is in the limited series category in which the wrenching social justice drama “When They See Us” faces off against Soviet nuclear accident tale “Chernobyl” and “Fosse/Verdon,” starring Michelle Williams as Broadway singer and dancer Gwen Verdon.

In the actor contest, Billy Porter is considered the favorite for his role in LGBTQ series “Pose” on FX after a breakout year in which he made waves on the Oscar and Met Gala red carpets for his groundbreaking gender-neutral outfits.

This year’s Emmys is taking place without a host following the break with tradition at the Oscars in February. But there still could be stinging barbs from presenters and winners, especially about politics.

“Hollywood never misses a chance to blast Washington,” O’Neil said. “Now we are heading into an election year, and it’s open combat between the two U.S. coasts.”

Additional reporting by Lisa Richwine; Editing by Will Dunham