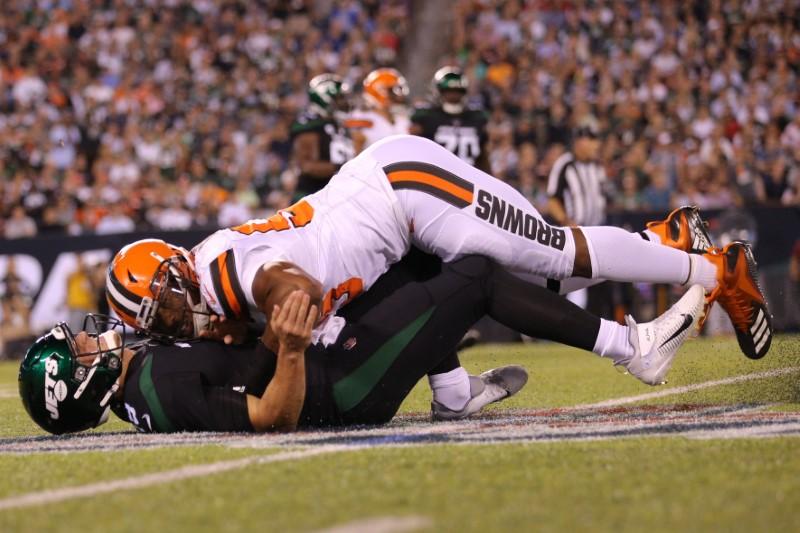 Cleveland Browns defensive end Myles Garrett was fined $42,112 by the NFL on Saturday for two hits he made on New York Jets quarterback Trevor Siemian during Monday night’s game.

Each hit cost Garrett a $21,056 fine in a game in which he was penalized four times, including twice for roughing the passer, while recording a career-best three sacks. Siemian suffered a season-ending ankle injury on the second roughing call, which occurred midway through the second quarter. The backup quarterback started in place of Sam Darnold, who was out with mononucleosis.

Also fined after the Jets-Browns game were Browns rookie linebacker Mack Wilson ($28,075), who was penalized for lowering his head and delivering a helmet-to-helmet hit on Jets wide receiver Ty Montgomery, and Jets safety Jamal Adams ($21,056) for a roughing-the-passer penalty against Browns quarterback Baker Mayfield.

—Washington Redskins tight end Jordan Reed was ruled out for Monday night’s game against the visiting Chicago Bears due to lingering effects from a concussion.

Reed has yet to play this season after being hurt in Washington’s third preseason game. The 29-year-old Reed sustained a concussion following a helmet-to-helmet hit by Atlanta safety Keanu Neal on Aug. 22. The hit drew a penalty and later a $28,075 fine.

An NBC Sports Washington report Saturday cited a source saying Reed could still be “weeks” from a return. Reed has recorded 329 receptions for 3,371 yards and 24 touchdowns in six seasons with the Redskins, earning Pro Bowl honors in 2016.

—Chicago Bears coach Matt Nagy said he expects Eddy Pineiro to play Monday night at Washington despite the kicker being listed as questionable on the Bears’ injury report.

Nagy told reporters Pineiro hurt his right (kicking) knee Friday in the weight room but termed the injury “minor.” Pineiro, 24, kicked Saturday and “felt like it was hurting him a little bit,” Nagy said. “I really do think that we’ll be OK.”

—The Cleveland Browns put linebacker and team captain Christian Kirksey on the injured reserve list with a chest injury.

The Cleveland Plain Dealer reported that he was believed to have torn a pectoral muscle on Monday night in the Browns’ 23-3 win against the New York Jets. He’d be eligible to return on Nov. 24 against the Miami Dolphins but could be out for the season.

Mailata, a seventh-round pick by the Eagles in 2018, has been dealing with a back injury since the preseason. He didn’t play at all last year and eventually was placed on IR in December. A former rugby player in Australia, the 6-foot-8, 346-pound Mailata made his way to the NFL via the International Pathway Program.

The 29-year-old suffered the injury in practice on Thursday. He will be eligible to be activated in eight weeks. Taylor started 45 of 48 games over the past three seasons.

—The New England Patriots promoted German running back Jakob Johnson to the 53-man roster after fullback James Develin (neck) was ruled out for Sunday’s game against the New York Jets.

Johnson takes the roster spot of receiver Antonio Brown, who was released Friday by the team. Johnson, who played his collegiate ball at Tennessee, played running back and linebacker for the Patriots in the preseason. He is a native of Stuttgart, Germany.