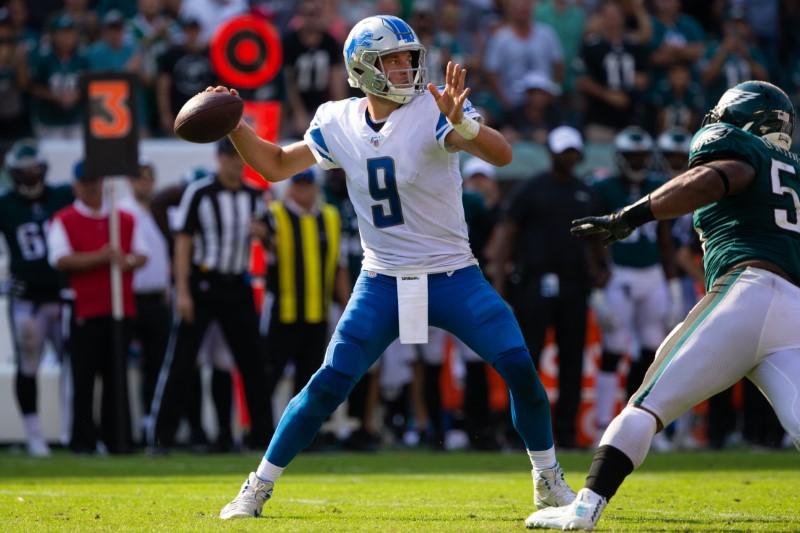 Quarterback Matthew Stafford completed 18 of 32 passes for 201 yards and one touchdown and the visiting Detroit Lions remained unbeaten with a 27-24 victory against the Philadelphia Eagles on Sunday.

Wide receiver Marvin Jones Jr. had six receptions for 101 yards and one touchdown as the Lions improved to 2-0-1.

Eagles quarterback Carson Wentz was 19 of 36 for 259 yards and two touchdowns to Nelson Agholor, but Philadelphia fell to 1-2.

The Eagles were hurt by seven dropped passes.

The Lions dominated much of the first half and took a 20-10 lead into the locker room.

After Eagles kicker Jake Elliott kicked a 25-yard field goal on the game’s opening drive, Detroit’s Jamal Agnew returned the ensuing kickoff 100 yards for a 7-3 Lions lead 3:46 into the game. It was the first kickoff return for a touchdown allowed by the Eagles since 2013.

Running back Jordan Howard’s first touchdown with the Eagles — a 1-yard run — gave them the lead back at 10-7 lead with 6:15 remaining in the first quarter.

But Detroit quickly reversed the momentum with a 13-play, 75-yard drive that carried into the second quarter and ended with a 1-yard touchdown run by Kerryon Johnson for a 14-10 lead.

After pulling ahead 17-10 on a Matt Prater 25-yard field goal, the Lions took advantage of a fumble by Agholor at the Detroit 40-yard line, returning it to the Eagles’ 22 and ultimately settling for a Prater 33-yard field goal and 10-point lead at halftime.

Agholor redeemed himself somewhat with a dazzling 20-yard touchdown catch in which he spun off a defensive player and found the end zone to get the Eagles within 20-17 with 4:15 left in the third.

The Lions responded on their next drive and took a 27-17 advantage when Jones Jr. hauled in a 12-yard catch from Stafford on the first play of the fourth quarter. They moved 75 yards in nine plays, taking 4:22 off the clock.

Agholor’s second touchdown reception, this time from 2 yards, closed the gap to 27-24 with 6:59 remaining.

The Eagles had one last chance to win when Malcolm Jenkins blocked a 46-yard field goal attempt by Prater just inside the two-minute warning. Wentz connected with running back Darren Sproles on fourth-and-5 for a 25-yard strike to get to the Lions’ 20, but Sproles was called for pass interference to negate the play.

On fourth-and-15, rookie JJ Arcega-Whiteside dropped a long pass inside the Detroit 5, allowing the Lions to run out the clock.