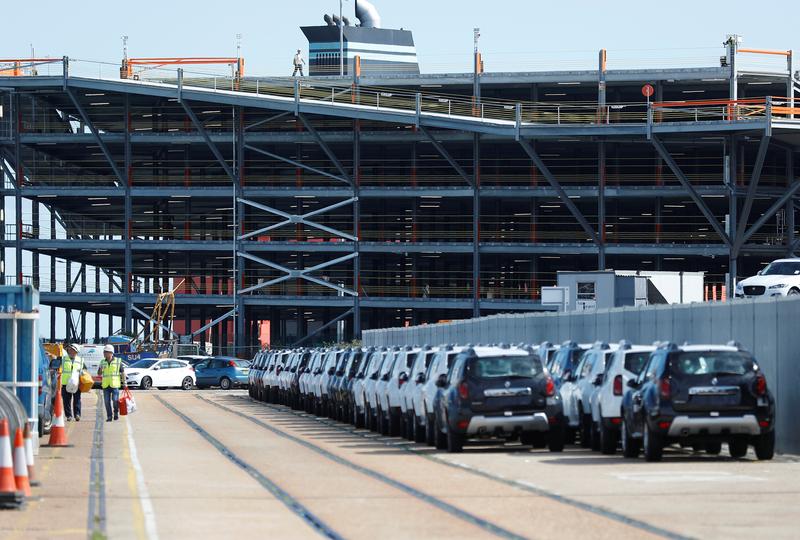 FILE PHOTO: Cars readied for export are parked next to a vehicle storage facility on the dockside at the ABP port in Southampton, Britain August 16, 2017. REUTERS/Peter Nicholls

BERLIN (Reuters) – A month before Britain is due to quit the European Union, the bloc’s car-makers have joined forces to warn of billions of euros in losses in the event of a no-deal Brexit with production stoppages costing 50,000 pounds a minute in Britain alone.

Britain is scheduled to quit the EU on October 31 but businesses have grown increasingly concerned at Prime Minister Boris Johnson’s apparent lack of progress towards a new withdrawal deal to replace the proposals of his predecessor Theresa May, which the British parliament rejected three times.

In a statement, groups including the European Automobile Manufacturers’ Association, the European Association of Automotive Suppliers and 17 national groups warned of the impact of “no-deal” on an industry which employs 13.8 million people in the European Union including Britain, or 6.1% of the workforce.

“The UK’s departure from the EU without a deal would trigger a seismic shift in trading conditions, with billions of euros of tariffs threatening to impact consumer choice and affordability on both sides of the Channel,” they wrote in Monday’s statement.

“The end of barrier-free trade could bring harmful disruption to the industry’s just-in-time operating model, with the cost of just one minute of production stoppage in the UK alone amounting to €54,700 (£50,000).”

If the two sides revert to World Trade Organisation trading rules, the likely consequence of a disorderly Brexit, the groups warned that the necessary tariffs will add 5.7 billion euros to the EU-Britain car trade bill.

The European car industry is dependent on heavily integrated cross-border supply chains, which rely for their effectiveness on a zero-tariff, almost border-free environment within the EU’s custom union.

Britain’s car industry, which is almost entirely foreign-owned, is exceptionally vulnerable, as it is dominated by factories owned by German, French and Japanese auto makers.