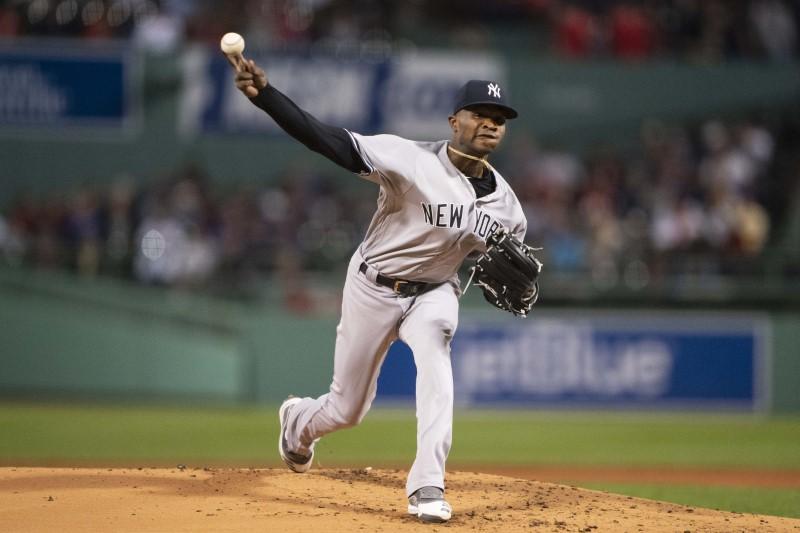 The leave, which can last up to seven days, is the first step while domestic violence allegations are investigated. An extension to the leave is possible after an initial investigation. Details of the alleged incident were not known.

Yankees manager Aaron Boone said Thursday that the MLB investigation will determine whether or not German is included on the postseason roster.

—Yankees reliever Dellin Betances, whose Achilles tendon injury on Sunday finished him for 2019, at least has reason to believe he won’t need surgery to repair the partial tear after he received a second opinion on the injury.

Betances, who was making his season debut in Toronto when he injured himself jumping on the mound after striking out the Blue Jays’ Brandon Drury, spent the season’s first five months recovering from shoulder and lat issues. He struck out both batters he faced on Sunday.

“He’ll be in a walking boot for another four weeks, and then they’ll kind of re-evaluate where he is, but the belief is that he will not need surgery,” Boone said. “I guess that could possibly change, but they feel pretty confident that this is something that will not need surgery.”

—First baseman Anthony Rizzo was back in the starting lineup for the Chicago Cubs and homered on Thursday, four days after leaving a game with a sprained ankle and subsequent reports that he could miss the end of the regular season.

A three-time All-Star and two-time Gold Glove winner, Rizzo injured his ankle on Sunday while charging toward home plate to field a bunt. Earlier indications were that Rizzo would be in a walking boot for five to seven days before another evaluation.

—Baltimore Orioles left-hander Ty Blach was outrighted to Triple-A Norfolk, three days after he was designated for assignment and then cleared waivers.

The DFA on Blach allowed the Orioles to claim right-hander Eric Hanhold off waivers from the New York Mets.

Blach, who was a waiver claim from the San Francisco Giants in August, went a combined 1-3 with a 12.00 ERA in seven appearances (five starts) for the Giants and Orioles this season.