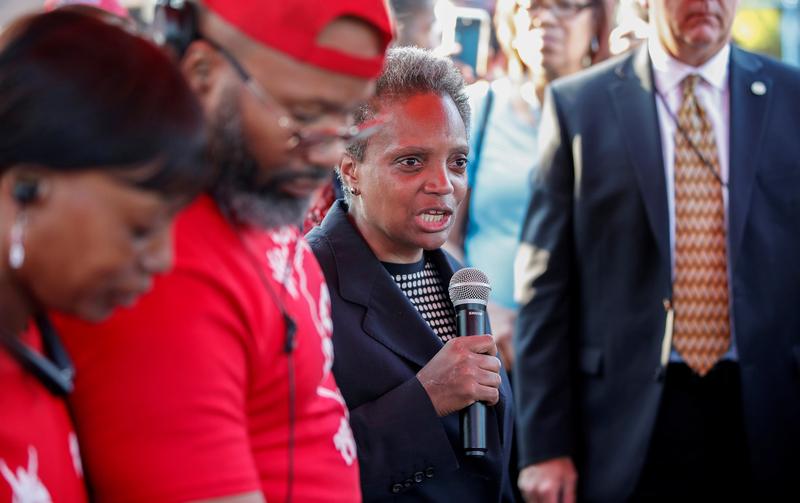 CHICAGO (Reuters) – Chicago Mayor Lori Lightfoot on Friday tried to reassure investors in the city’s debt that she will take on big financial problems, while providing no new clues as to how she plans to accomplish the task.

At the city’s annual investors conference, Lightfoot, a former federal prosecutor who took office in May, addressed a “jaw dropping” $1 billion deficit in the upcoming budget that her administration had whittled down to $838 million.

“My administration is unafraid to make the tough but necessary decisions to get us on the path to fiscal health,” the mayor said, pointing to efforts to reign in overtime, freeze hiring and other moves.

A chronic budget deficit along with a big unfunded pension liability have led to low credit ratings and high borrowing costs for the nation’s third-largest city.

Investors, who were hoping for insight into how Lightfoot will address the looming budget hole, said they will have to wait until the mayor presents her budget to the city council on Oct. 23.

“I’m still a little anxious just because she’s new and she doesn’t have a financial background,” he said.

Lightfoot outlined revenue ideas she previously floated such as a graduated real estate transfer tax to raise more money off of high-end residential property sales and a congestion tax. Chicago also needs Illinois lawmakers to revise a new state law that authorized the city’s first casino after a recent study concluded the tax structure was erroneous.

The mayor said a property tax hike remains on the table, while acknowledging it would be a tough sell to residents.

In August, the mayor announced a $838 million gap in the budget for fiscal 2020, which begins Jan. 1, fueled by growing costs for personnel, pensions and debt. The projected shortfall is the city’s biggest since at least 2001, surpassing 2011’s $654.7 million gap.

Earlier this month, S&P Global Ratings, said that how Chicago addresses the gap “will be pivotal” to the city’s rating of BBB-plus with a stable outlook.