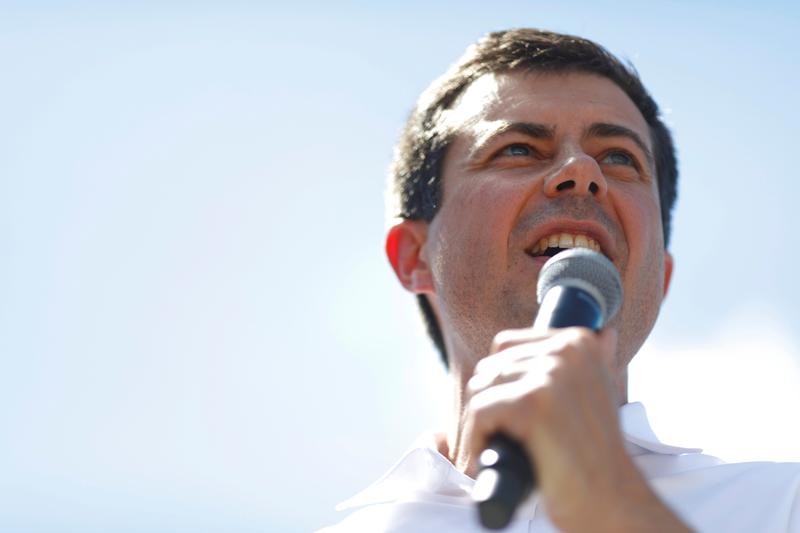 WASHINGTON (Reuters) – Democratic presidential hopefuls Pete Buttigieg and Kamala Harris return to the crucial state of Iowa this weekend with pressure mounting on them to break into the top tier of 2020 election contenders.

Both showed promise early in the contest for the Democratic Party nomination to run for the White House but both have been stuck in single-digit support in most opinion polls, lagging far behind former Vice President Joe Biden and U.S. Senators Bernie Sanders and Elizabeth Warren.

Iowa plays an outsized role in picking presidential nominees, holding first-in-the-nation caucuses in February. With just a little over four months to go, the Buttigieg and Harris campaigns say they are making a renewed push there, hiring dozens of staff and opening new offices.

Harris, a U.S. Senator from California, will campaign in the Democratic-leaning central and eastern part of Iowa from Thursday through Saturday, back in the state for the first time since early August. She has been off the campaign trail doing high-dollar fundraising events.

They will be among a bevy of contenders appearing at the traditional Steak Fry in Des Moines on Saturday. Twenty Democrats are running for the nomination and the chance to take on Republican President Donald Trump in the 2020 election.

“Iowa is more important than it has ever been,” said Joe Trippi, a veteran Democratic strategist who managed Howard Dean’s insurgent 2004 campaign for president, expecting the sprawling field to winnow down after the Iowa caucus.

Whoever finishes first and second in Iowa will command the bulk of media attention, he said, and reshape the narrative of the race.

“If there is going to be a shake-up, it’s going to happen there.”

Harris has faced questions in recent weeks about whether she is more committed to states such as Nevada and South Carolina at the expense of Iowa. Those two states also have early nominating contests and have more diverse populations – African-Americans in South Carolina and Latinos in Nevada – and may better play to Harris’ political strengths as a black woman.

But her campaign insists it is not neglecting Iowa. After a swing this weekend, Harris plans to make stops once a week in the state in October, her campaign manager, Juan Rodriguez, said in a memo posted to the online site Medium on Thursday.

Beyond several campaign events planned, Harris will also walk the picket line with striking employees of McDonald’s Corp on Saturday.

According to the most recent Reuters/Ipsos poll, Harris stood at 5.7% with Buttigieg at about 4%, far behind Biden’s 22%. Sanders and Warren each had 16% and 11%.

Despite their respective struggles, Buttigieg, 37, and Harris, 54, are considered to be rising stars within the party.

Both have tried to position themselves as the alternative to voters nervous about front-runner Biden’s age or his sometimes uneven track record, or those concerned about Warren and Sanders, progressives who advocate for sweeping structural changes in the United States.

“If voters are looking for a candidate who is less ideological because they can appeal to a broader cross-section of voters, but they want somebody who is a different generation than Biden, that’s Kamala,” said an adviser to Harris who requested anonymity.

Buttigieg, meanwhile, raked in an eye-popping $24.8 million in the second quarter of the year and has been aggressively raising cash since, but only recently has he begun to seriously spend that money in Iowa.

By end of this week, he will have opened 20 offices in Iowa in the past three weeks and built a staff of 100 in the state, his campaign said.

“I think the numbers are soft,” said Jess O’Connell, a top strategist for Buttigieg’s campaign. “I think there is a lot of movement. Voters are taking their time to make their decision, and that benefits Mayor Pete.”

Buttigieg has “added to his staff and offices seem to be opening every day,” said Jeff Link, an Iowa-based strategist who worked for then-candidate Barack Obama’s 2008 campaign. “He also started advertising on TV, which helps.”

Buttigieg and Harris have to hope that Democratic history can repeat itself.

Trippi, the former campaign manager for Howard Dean, for one, has seen first-hand candidates come from far behind to win Iowa.

In 1988, his candidate, U.S. Representative Dick Gephardt, was low in the polls with a month to go, but caught fire with a protectionist message on trade and won the caucuses. In 2004, Dean, who was the front-runner, was overtaken at the last moment by then-U.S. Senator John Kerry. Kerry went on to win the nomination.

“In a multi-candidate field such as this, I wouldn’t count anybody out,” Trippi said.