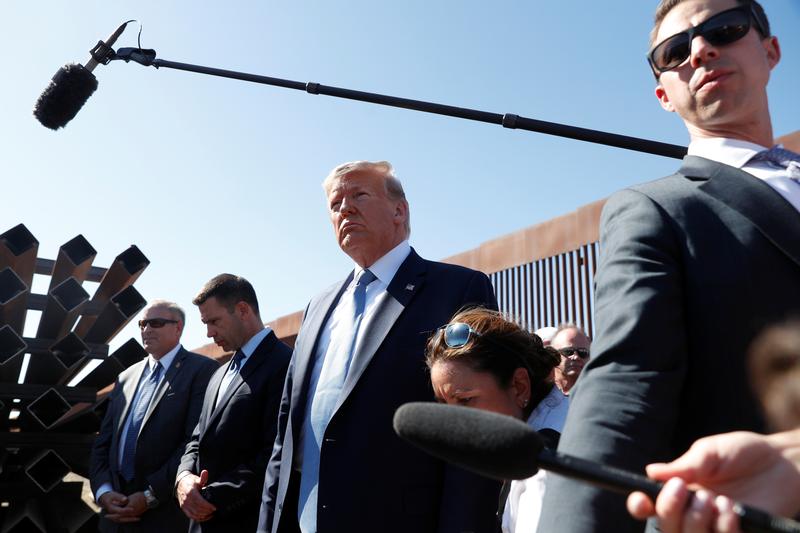 LOS ANGELES (Reuters) – U.S. President Donald Trump said on Wednesday that the Environmental Protection Agency (EPA) will issue a notice in less than a week to the city of San Francisco over its homelessness problem and attendant pollution.

Trump and officials in San Francisco and Los Angeles have been at odds over what the president believes is their failure to tackle the growing number of people living on the streets.

“They’re in serious violation,” Trump told reporters aboard Air Force One. “They have to clean it up. We can’t have our cities going to hell.”

Trump said the issue was an environmental one because “tremendous pollution”, including syringes used by homeless addicts to inject drugs, was flowing into the Pacific Ocean from Bay Area cities.

Governor Gavin Newsom and other Democratic elected officials, including the mayors of Los Angeles and San Francisco, asked Trump this week for federal funds to expand programs to provide stable living environments for the homeless.

“Your letter seeks federal dollars for California from hardworking American taxpayers but fails to admit that your state and local policies have played a major role in the current crisis,” Carson said in response.

Since Trump’s 2016 election, California state officials have filed dozens of lawsuits over the administration’s actions on a host of issues from immigration and healthcare to the environment.

On Wednesday, the two sides went to war over who should set U.S. standards for vehicle emissions and electric cars, the first feint in what could be a long legal battle.

Trump, who was in California this week for a series of fundraisers for his 2020 re-election campaign, has criticized the homelessness problem in the Democratic strongholds of California’s biggest cities.

Los Angeles Mayor Eric Garcetti, a Democrat, said in a video posted to Facebook on Tuesday from a newly created refuge for homeless people that the facility showed the kind of work underway in the city to help the unsheltered.

“It’s no secret that I have disagreed with you on almost everything Mr. President, but if you are in your heart willing to save lives alongside us, we know what works here,” Garcetti said in the video.

This week, Newsom said he had made housing affordability a priority, committing $1.75 billion to the creation of new housing and encouraging or forcing cities to approve new home construction.

The population of homeless in the nation’s second-largest city has increased 16% in the past year, an annual census released in June by the Los Angeles Homeless Service Authority (LAHSA) showed.

An estimated 130,000 people are homeless in California on any given day, more than any other state, the Department of Housing and Urban Development says.

Homeless advocates have cited low housing vacancy as a main contributor to homelessness. The Los Angeles metropolitan area has a roughly 4% vacancy rate, one of the nation’s lowest, according to the U.S. Census Bureau.

Los Angeles County officials on Tuesday took action in line with one of Carson’s recommendations, which was to give police more power to clear homeless encampments.

The board of supervisors voted to join a legal challenge to a federal appeals court ruling that bars cities from arresting or citing homeless people for camping on sidewalks unless they can all be offered shelter.

(This story corrects to show Trump said, not ordered, EPA to issue notice)