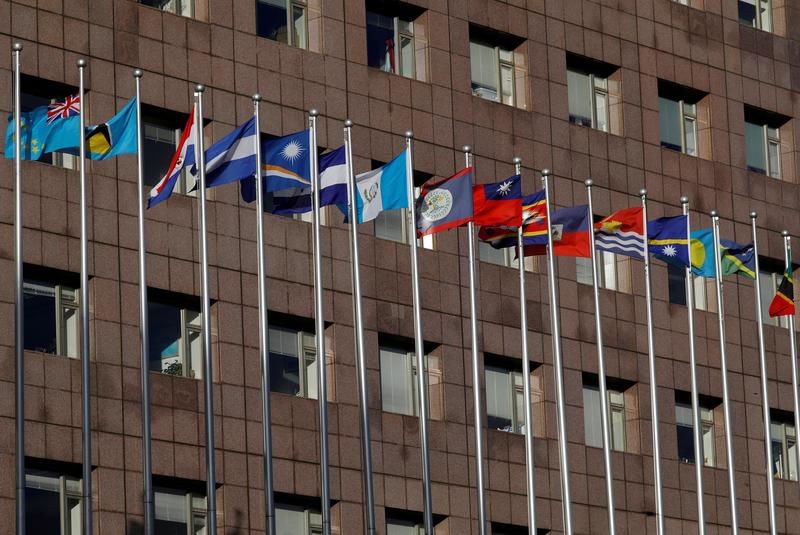 FILE PHOTO: National flags are seen inside the Diplomatic Quarter, where the embassies of Taiwan’s allies are located, in Taipei, Taiwan August 23, 2018. REUTERS/Tyrone Siu

The Solomons’ decision to switch diplomatic ties drew immediate criticism from the United States, and has even sparked calls by protesters in one major island province to seek independence from the rest of the archipelago.

The prime minister’s office said in a statement to Reuters that it could not confirm who would represent the Solomon Islands in New York.

Sogavare’s grip on power could also be tested if he left the country, due to a parliamentary system that relies on maintaining alliances to retain power.

A parliamentary source said that Foreign Affairs Minister Jeremiah Manele had been prepped to lead the delegation.

“The government is not stable enough for him to leave,” the source said, referring to the prime minister.

The island delegation is scheduled to leave as early as Friday. The general assembly opened on Sept. 17, and the high-level general debate starts on Sept. 24.

U.S. Vice President Mike Pence had directly liaised with Sogavare in recent months, and Taiwan supporters had wanted to stall the island government’s diplomatic decision until after the U.N. meetings, where Sogavare could potentially form closer ties with the United States.

Pence has now declined to meet the leader in response to the island nation’s decision on Monday to sever its long-standing ties to Taiwan.

While the United States upholds the “one-China” policy recognizing Beijing and not Taipei, it assists Taiwan, which includes significant sales of arms to the island.

The small but strategically located archipelago and site of fierce fighting in World War II had been assessing its Taiwan alliance since Sogavare took control after a general election in April.

The issue has divided loyalties in the former British protectorate, an archipelago of just over 600,000 people.

The United States retains strong support in the Malaita province, which provides a large voting bloc in parliament.

Pro-Taiwan residents in Malaita this week asked the Solomon Islands government to grant the province independence, according to a letter of demand seen by Reuters.

“Any Malaitan who fail(s) to support our demand for independence is not welcome in Malaita province until he or she shows his or her support for our cause to become independent from Solomon Islands government to manage our own affairs,” the letter said.

Reporting by Jonathan Barrett in Sydney; Editing by Christopher Cushing