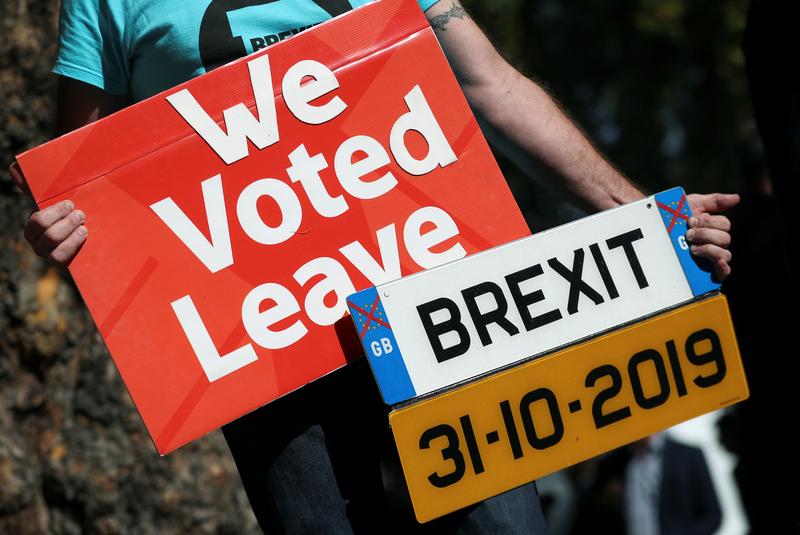 LONDON/BRUSSELS (Reuters) – Britain said on Thursday it had shared documents with Brussels setting out ideas for a Brexit deal, but an EU diplomat described them as a “smokescreen” that would not prevent a disorderly exit on the Oct. 31 divorce date.

The “confidential technical non-papers” were not the formal written legal proposals Brussels has asked for, and diplomatic tensions are mounting as the deadline approaches for London to leave the political and trading bloc it joined in 1973.

France said time to agree a Brexit deal was running out and that Britain needed to come up with something concrete in the coming days if it hoped to clinch an agreement with EU leaders at an Oct. 17-18 summit.

Six weeks before the day when Prime Minister Boris Johnson says he will lead Britain out of the EU, with or without a deal, talks on an agreement have made little progress, heightening frustration in Brussels and raising the prospect of an economically damaging no-deal Brexit.

British Brexit minister Stephen Barclay said London was in no rush to comply with EU requests for specific written proposals and urged the 27 other member states to be flexible and creative to reach a deal.

“Why risk crystallising an undesirable result this November when both sides can work together until December 2020?” Barclay said in Madrid. “We risk being trapped in a zero-sum game and that will lead to zero-sum outcomes.”

Britain wants a deal to guide its relationship with its biggest trading partner after it leaves the bloc, but would leave without one if both sides cannot agree in the next 42 days, he said.

The EU warned on Wednesday that Britain was headed for just such an outcome as London’s ideas for solving the contentious issue of how to treat the Irish border were far from unlocking a deal. It said Britain should stop pretending to negotiate

Sitting on one island, Ireland is in the EU but Northern Ireland is part of the United Kingdom, so the border between them will become Britain’s frontier with the EU after Brexit.

In a worst-case scenario, a no-deal Brexit could mean severe disruption to trade, supplies of medicines, fresh foods and possible public disorder, according to the British government’s contingency plans.

The British government said the documents it had shared with Brussels reflected the ideas it had put forward verbally in recent meetings with the EU’s executive Commission.

In Brussels, an EU diplomat said the documents were “descriptive papers” rather than legal texts, and described London’s gesture as “another smoke screen” that would be rejected by the Commission as too short on detail.

Finnish media cited Prime Minister Antti Rinne as saying that he and French President Emmanuel Macron had agreed an end-September deadline for Johnson to present a concrete proposal to avoid a no-deal Brexit.

“The idea was to say that time is running out and that we won’t be negotiating directly at the European Council (summit) in mid-October,” a French diplomatic source said.

“We are a bit worried over what is happening at the moment in Britain and the mess which is created in Europe,” Finnish media cited Prime Minister Antti Rinne as saying.

A British government spokesman pushed back against the idea that a deadline was looming.

“We will table formal written solutions when we are ready, not according to an artificial deadline, and when the EU is clear that it will engage constructively on them as a replacement for the ‘backstop’,” he said.

Johnson says his aim is to secure a deal and that he will seek an agreement at the EU summit to remove the Irish border backstop, an insurance agreement to prevent the return of border controls between Northern Ireland and the Irish Republic.

Opponents of the backstop in the British parliament worry it would lock the United Kingdom into the EU’s orbit for years.

Ireland said on Thursday Britain had failed to supply credible Brexit proposals and there had been no breakthrough at talks on Wednesday with the Northern Irish party that supports Johnson’s Conservative government.

Foreign minister Simon Coveney said frustration was growing in the EU that London had not yet tabled “credible proposals”.

In London, Britain’s Supreme Court was hearing a third and final day of legal arguments over whether Johnson acted unlawfully when he suspended parliament in the run-up to Brexit.

If Johnson loses, he may be compelled to recall parliament earlier than scheduled, giving additional time for legislators to scrutinise and oppose his Brexit plans.

A ruling could come late on Thursday at the earliest, but is more likely to be delivered in the following days.

Most members of the House of Commons, Britain’s lower chamber of parliament, are opposed to a “no-deal Brexit”.

The hearing in the Supreme Court stems from Johnson’s decision to ask Queen Elizabeth to prorogue, or suspend, parliament from Sept. 10 to Oct. 14, on the grounds that he needed the time to prepare a new legislative agenda.

Johnson’s opponents say the real reason he sought the suspension was to prevent parliament from interfering with his Brexit strategy, and that he unlawfully misled the sovereign with his advice.