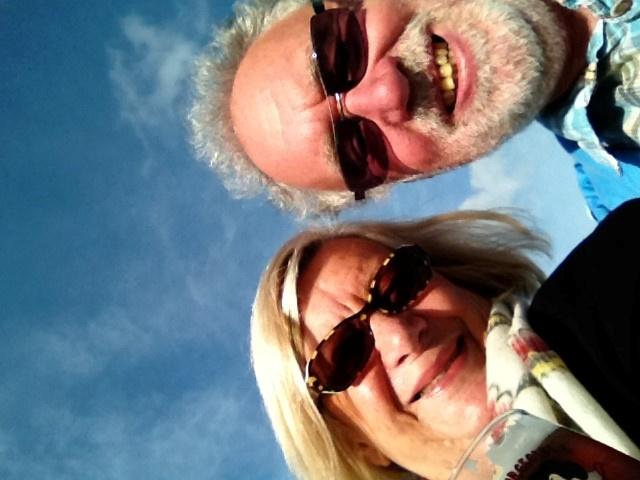 LONDON (Reuters) – Sonja Brain, 84, is losing her sight and bed-bound in hospital after a cancerous tumor was removed from her spine. But she has another problem: proving she has the right to stay in the United Kingdom after Brexit.

An undated picture shows Sonja and Paul Brain as they pose for a selfie during their holidays in an unknown location. Paul Brain/Handout via REUTERS. THIS IMAGE HAS BEEN SUPPLIED BY A THIRD PARTY. NO RESALES. NO ARCHIVES

Brain, a Dutch national who moved to the United Kingdom from the Netherlands 59 years ago, has a British husband, four British children, six British grandchildren, and has lived in the same house in Wales for the last three decades.

British Prime Minister Boris Johnson has said he wants EU citizens to stay after Brexit but some are now ensnared by bureaucratic systems which their families say are inflexible and impenetrable.

To process her application for settled status in the United Kingdom, Brain needs a current Dutch passport. But her husband Paul said the Dutch embassy says she must travel to London to renew it.

“I am appalled really, it just seems cruel,” he told Reuters from their home in south Wales.

A Dutch official said the embassy was aware of the case and working with the family to find a solution.

Around 3.5 million EU citizens live in the United Kingdom but as it moves toward the exit, due on Oct. 31, they must apply to Britain’s Home Office for the right to remain.

Some fear that after Brexit they could lose the right to live and work in the United Kingdom or access free healthcare.

The3million, a campaign group set up to protect the rights of EU citizens in Britain, said tens of thousands of EU nationals here may be struggling to secure their rights or are being given the wrong immigration status.

The European Parliament on Wednesday expressed concern at the settlement scheme and urged the government to review it.

Brain’s troubles started in May last year when she was diagnosed with breast cancer. Her passport was due to expire in November and the couple planned to renew the document once her health improved.

But the cancer spread, she developed cerebral palsy and macular degeneration, which means she is losing her sight.

“Right in the middle of serious medical complications, she was diagnosed with cancer,” Paul Brain said, a professor of biological sciences. “And the difficulty then was that, of course, you don’t tend to look at the passport under those circumstances – you’re more concerned with anything else.”

After the government began registering EU nationals, Brain’s husband decided to apply on her behalf.

But he was unable to complete the application because the registration system refused to accept the expired Dutch passport. He contacted the Home Office online and wrote to the Dutch embassy for help. So far there has not been a resolution.

“Ok, they’ve maybe got a system which works well for young people who’ve got all the documentation, etcetera, but they seem to have made no allowances whatsoever for elderly people – perhaps from difficult backgrounds – who are not quite as IT-literate,” Paul Brain said.

Until recently, they had even considered trying to travel to London because the situation was weighing on her mind. But they eventually decided she was too ill.

“If I could get this resolved it would remove a certain stress from my wife,” he said. “They just seem to have gone for the quickest, easiest outcome and they can’t be bothered to deal with exceptions.”

The Home Office said they want all EU citizens to stay in Britain after Brexit and in exceptional circumstances they will accept alternative documents if applicants do not have a valid passport or a national ID card.

A spokesman for the ministry recommended Brain’s family contact the EU Settlement Resolution Centre, a telephone advice service, to get support with her application.

But Paul Brain says: “I just got a straight rejection and there was no mention that you can try something else.”

Britain’s immigration minister, Brandon Lewis, told Reuters the registration program is working well. He said 1.5 million of the 3.5 million EU citizens living in Britain have been processed since the program opened.

Lewis said the main problems he has seen after investigating individual cases are when people have provided incorrect information or if they have not provided enough information to prove they have lived in Britain for five years.

“The scheme we are running is exactly what we outlined,” he said. “It is processing people through really quickly.”

Lawyers say elderly people are finding it harder to use the registration scheme because they are less likely to be aware they need to apply and they have fewer documents to prove their status because they are not in work.

Paolo Arrigo’s Italian elderly mother-in-law has also faced difficulties. The 86-year-old, who has dementia, first moved to Britain in 1961.

She should have automatically qualified to remain indefinitely. She has lived in the country for almost six decades, working much of that time as a school dinner lady. She has two children and four British grandchildren.

But when they completed her application she was told she had insufficient evidence to prove she had lived in Britain for five continuous years.

Instead, she was initially granted pre-settled status, which means she has the right to stay in Britain until 2024, when she will need to reapply again. But she could lose her right to remain in Britain if she leaves for two years.

They eventually had to take her in a wheelchair, along with her 90-year-old husband, to a citizens’ advice bureau and pay a lawyer to guide them through the process.

She was given settled status this week, four months after her family said they made the first application.

The Home Office said there was a mistake on her original application and their caseworkers helped resolve the problem.

“It has been a real marathon,” Arrigo said. “They should have never been in this situation.”