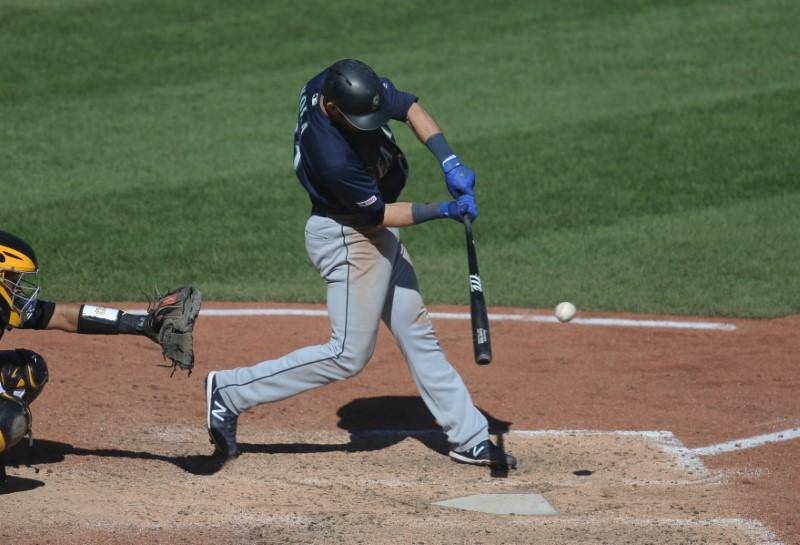 Austin Nola grounded into an 11th-inning double play that produced a run Thursday to give the visiting Seattle Mariners a 6-5 win and a three-game sweep of the Pittsburgh Pirates.

With a 5-5 tie going against reliever Clay Homes (1-2), Shed Long led off the 11th by reaching on first baseman Jose Osuna’s fielding error. After Kyle Lewis struck out, Omar Narvaez singled to left, moving Long to third. Nola grounded into a double play, with the second out coming in a rundown between first and second, while Long scored.

Nola earlier had an RBI single. Long added a two-run single, and Braden Bishop hit an RBI single for Seattle (65-88), which has won five straight.

Jake Elmore drove in two runs with a double and single, Joe Musgrove hit an RBI double, and Elias Diaz and Kevin Newman each hit RBI singles for the Pirates (65-88), who have lost six in a row.

Seattle starter Yusei Kikuchi pitched four innings, giving up four runs and eight hits, with one strikeout and one walk.

Brandon Brennan (3-6) pitched a scoreless 10th. Erik Swanson pitched the bottom of the 11th for his first career save.

In the Seattle second, Daniel Vogelbach drew a one-out walk, went to third on Tim Lopes’ double and scored when Donnie Walton reached on shortstop Cole Tucker’s throwing error. Bishop drove in Lopes with a single for a 2-0 Seattle lead.

Kikuchi, in his first major league at-bat, reached on Musgrove’s fielding error, loading the bases. Long’s base hit brought in Walton and Bishop to make it 4-0.

In the bottom of the second, RBI doubles by Elias Diaz and Jake Elmore cut the Seattle lead to 4-2. With two outs, Musgrove doubled to drive in Elmore, and Musgrove scored on Kevin Newman’s base hit for a 4-4 tie.

In the fifth, Diaz drew a one-out walk, moved to second on Cole Tucker’s groundout and scored on Elmore’s single for a 5-4 Pirates lead.

The Mariners tied the game in the seventh on Nola’s RBI single.