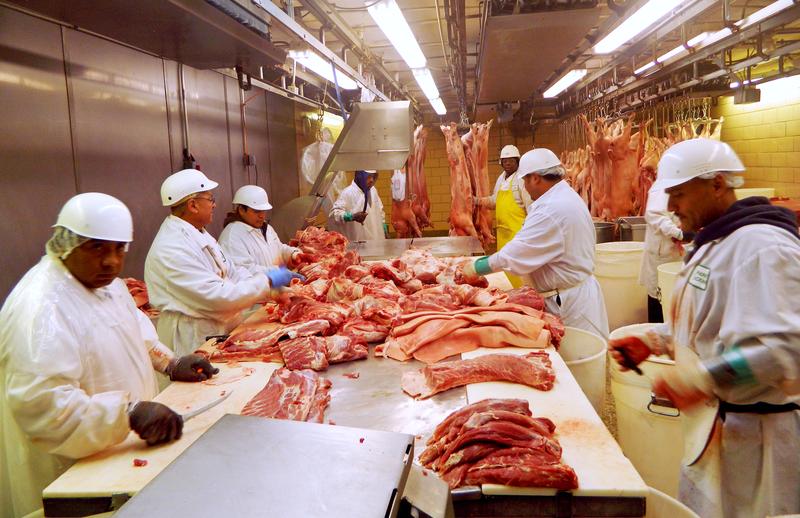 CHICAGO (Reuters) – U.S. food safety and the health of plant workers will be at risk from new federal rules that allow meat companies to slaughter hogs as fast as they want and shift the role of government inspectors, food and environmental advocates said on Tuesday.

The warnings about the U.S. Department of Agriculture’s first update of inspection procedures at hog slaughterhouses in more than 50 years come after several high-profile recalls in the meat sector.

The USDA earlier on Tuesday published a final version of rules that will eliminate limits on how fast companies such as Tyson Foods (TSN.N), Hormel Foods (HRL.N) and WH Group’s (0288.HK) Smithfield Foods can slaughter pigs – a change long sought by meatpackers.

The companies can instead determine their own slaughter speeds based on their ability to prevent fecal contamination and minimize bacteria, according to the rules.

Packers can also have employees, rather than USDA workers, remove meat with certain defects from the slaughtering process. Government inspectors will continue to check all live animals before they are killed as well as meat products after slaughter.

“The implementation of the rule will result in the fox guarding the henhouse,” Hauter said.

Tyson Foods, the biggest U.S. meat producer, slowed chicken processing to protect food safety this year after it recalled millions of pounds of poultry products over concerns they contained extraneous materials like rubber and metal.

Tyson, Hormel and Smithfield did not immediately respond to requests for comment on the USDA’s new rules. The North American Meat Institute, which represents the packers, said companies will continue to produce safe pork.

“Increasing pork plant line speeds is a reckless corporate giveaway that would put thousands of workers in harm’s way as they are forced to meet impossible demands,” said Marc Perrone, president of the United Food and Commercial Workers International Union, which represents slaughterhouse employees.

The USDA ran a pilot program for the new rules that was announced in 1997. Participating slaughterhouses do not operate significantly faster than the current maximum speed of 1,106 pigs per hour, according to the agency.