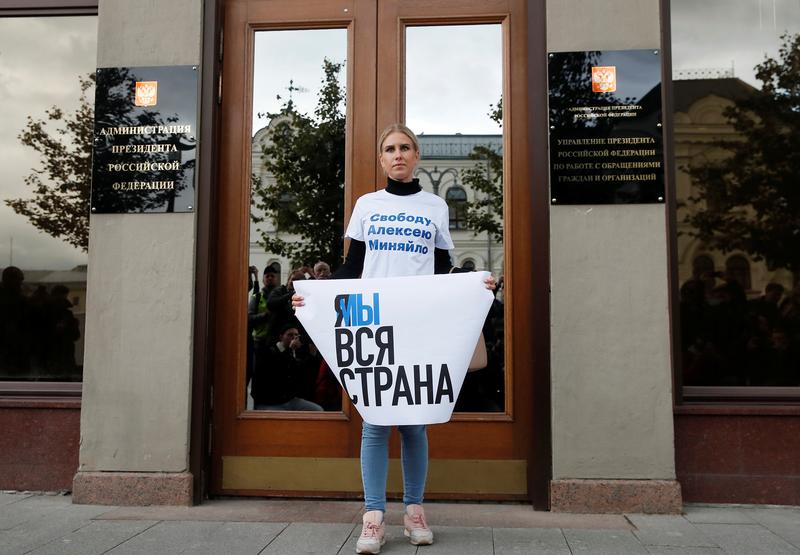 MOSCOW (Reuters) – A Moscow court freed an opposition protester from custody on Wednesday, as school teachers and Orthodox priests told authorities to rein in a crackdown following the biggest anti-Kremlin protests in the capital for years.

Russian opposition figure Lyubov Sobol holds a placard, which reads “I am/We are the entire country”, during a rally in support of Pavel Ustinov, who was sentenced to three and a half years in jail for dislocating a police officer’s shoulder when he was arrested during an unauthorised rally to demand free elections, in front of the Presidential Administration building, in Moscow, Russia September 18, 2019. REUTERS/Maxim Shemetov

The court released Aidar Gubaydulin, who faced years in jail for assaulting a police officer at a protest last month, on bail. His supporters say all he had done was throw a plastic bottle at a police officer and that he had missed his target.

The court ruled the case should be reviewed by prosecutors, a move the opposition cast as a concession after an array of prominent Russians demanded the release of an actor jailed for 3-1/2 years on similar charges.

Celebrities from film stars to a Eurovision pop singer took to social networks on Tuesday to condemn the conviction of novice actor Pavel Ustinov, protesting that he had not taken part in the rally and had not resisted arrest.

Police arrested more than two thousand people at protests over the summer that began when more than a dozen opposition candidates were barred from taking part in a local election in Moscow that was held this month.

Several protesters were given jail terms of around 3-4 years for assaulting police officers, convictions the opposition says are part of a broader crackdown aimed at stymying its activities.

The authorities deny that, and say many of this summer’s opposition protests were illegal because they were not formally authorized and that people were prosecuted for breaking the law.

On Wednesday, more than 700 school teachers signed an open letter circulated online condemning what it said were the “array of unjust sentences issued flouting the constitution…”

“People … have been arrested without cause, beaten, convicted and sentenced to imprisonment or large monetary fines without their guilt being proven …,” it said.

A separate open letter signed by more than 70 Orthodox clerics said the convictions had been disproportionately harsh and appeared designed to intimidate protests. It called for them to be reviewed.

Outside the Kremlin administration building in Moscow, scores of supporters queued up and took turns to stand in one-person pickets in Ustinov’s defense, a form of protest that does not require formal permission from city authorities.

The Kremlin declined to comment on the outcry, saying Ustinov had appealed against his conviction and that it was up to the courts to rule in the case.