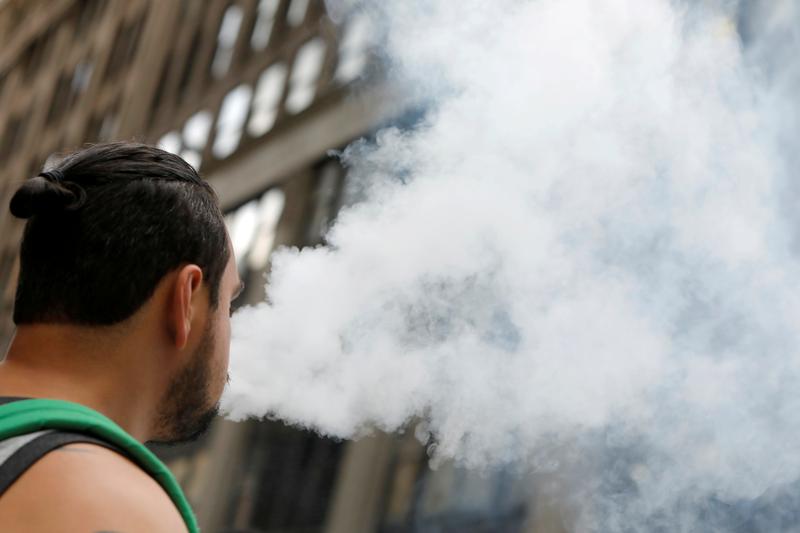 (Reuters) – New York became the second state to ban flavored e-cigarettes on Tuesday after its Democratic governor called for emergency action in response to concerns about their rising use among teens and a nationwide spate of lung illnesses.

Governor Andrew Cuomo on Sunday called for an urgent meeting of the state’s Public Health and Health Planning Council to consider the proposed ban.

The panel on Tuesday voted to adopt the prohibition, which applies to all flavored e-cigarettes besides menthol, Cuomo’s office said in a statement.

The state Department of Health pledged to provide retailers with a two-week grace period before conducting site visits to enforce the ban starting on Oct. 7.

New York is the second state in the nation to introduce such a ban, after Michigan did so earlier this month.

“It is undeniable that vaping companies are deliberately using flavors like bubblegum, Captain Crunch and cotton candy to get young people hooked on e-cigarettes – it’s a public health crisis and it ends today,” Cuomo said in a statement.

The share of high school students using e-cigarettes has more than doubled over the past two years, with 27.5% reporting they had used an e-cigarette in the past month, according to preliminary federal data released last week.

Nearly 400 people around the country have been stricken with a lung illness that is potentially vaping-related, according to the U.S. Centers for Disease Control and Prevention. Six have died.

Investigators have said they are trying to understand what causes the illnesses.

Michael Frennier, president of the New York State Vapor Association, criticized the New York ban, saying the recent spike in deadly lung illnesses was tied to illicit vaping of the marijuana component THC, not use of flavored nicotine.

“It’s kind of like having a mayonnaise outbreak of E.coli and the politicians come forth and they say ‘We’re going to fix this to protect the people of our state and we’re going to ban peanut butter tomorrow morning,’” Frennier said.

Meanwhile, health officials have warned people against buying vaping products on the street or using marijuana-derived oil. They have said people should avoid inhaling vitamin E acetate, an ingredient found in some vaping products.

New York state Health Commissioner Dr. Howard Zucker is evaluating a proposal to extend the ban on flavored e-cigarettes to cover menthol, which was excluded from the prohibition approved on Tuesday, Cuomo’s office said.

Juul Labs Inc, the leading U.S. e-cigarette maker, has insisted that it “never marketed to youth, period,” although the company has said it regretted that some of its early advertising “was executed in a way that was perceived as appealing to minors.”

On Tuesday, Juul Labs spokesman Ted Kwong said the company agreed with the need for “aggressive category-wide action on flavored products,” adding that it “will fully comply with local laws.” Juul last year pulled many of its flavors from retail stores and suspended its social media accounts in an effort to curb use among teenagers.