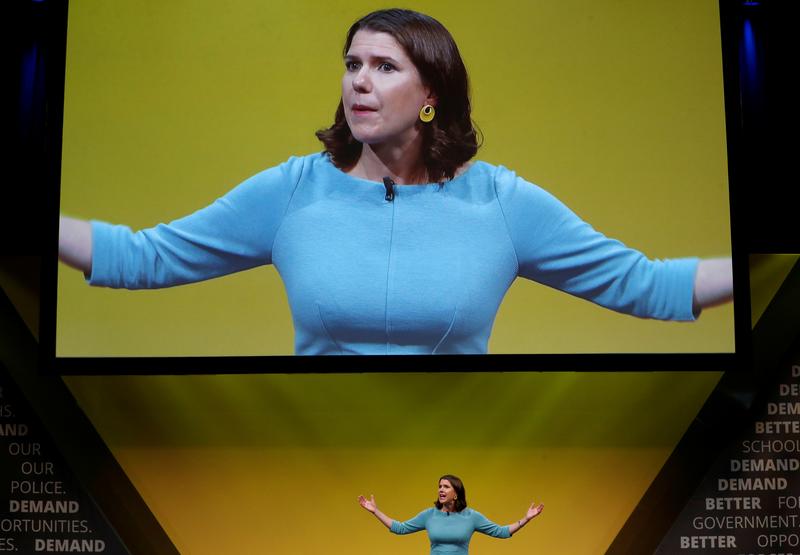 BOURNEMOUTH, England (Reuters) – The Lib Dems face the fight of their lives to rescue the country from the negative effects of leaving the EU, party leader Jo Swinson said on Tuesday, outlining the battle for hearts and minds in the next few weeks.

As the clock ticks down to Britain’s scheduled exit from the European Union on Oct. 31, Prime Minister Boris Johnson has yet to agree a deal with Brussels.

That has raised the prospect of an unmanaged, no-deal exit – something Johnson says his government is preparing for, but which opponents of Brexit say will wreak havoc on Britain’s $2.8 trillion (£2.26 trillion) economy.

Swinson has already used her party’s annual conference to toughen its anti-Brexit stance, promising to cancel Brexit if the Liberal Democrats score an unlikely victory in a widely expected early election.

On Tuesday, the 39-year-old Scot who became the party’s first female leader in July, used her closing conference speech to set out the challenge the party faces.

“Ahead of us we have the fight of our lives for the heart and soul of Britain,” she said. “The next few weeks are about deciding the kind of country that we are, who we want to be.”

Swinson said her ambition for the party, which is gaining support but only holds 18 seats in the 650-seat parliament, knew no limits, and presented herself as a potential prime minister.

Johnson wants to call an election before the next scheduled one in 2022, but has so far been blocked by opponents, including the Lib Dems, who say they first want to make sure he can not take Britain out of the EU without an exit deal.

Swinson attacked Johnson’s exit strategy as “sickening” and warned voters not to trust his ability to strike a new deal in the next month, nor believe his assertion that a no-deal Brexit can be managed.

“The truth is you can’t plan for no-deal,” she told party members in the southern English resort of Bournemouth. “Planning for no-deal is like planning to burn your house down. You might have insurance, but you’re still going to lose all your stuff.”

As a party which has never won more than 62 seats at an election, the prospect of Swinson forming a government is a distant one.

By reshaping their liberal, centrist organisation into a party at one extreme of the Brexit spectrum they are hoping to cash in on the anger of the 16 million voters who backed ‘remain’ in the 2016 referendum on leaving the EU.

Several conference delegates and elected officials interviewed by Reuters said that an outright election win was possible but few expressed strong confidence in that outcome.

“To get a majority you wouldn’t only have to beat the Tories (Conservatives), you have to beat Labour in lots of seats as well,” said Caroline Voaden, a Liberal Democrat member of the European parliament. “I don’t know, anything can happen. We have to dream big though.”

Instead, the most likely election outcome is more seats and a kingmaker role if an election fails to produce a clear winner.

Swinson has publicly ruled out a formal coalition with either Johnson’s Conservatives or the socialist-led Labour Party, but she did not address the issue directly in her speech.