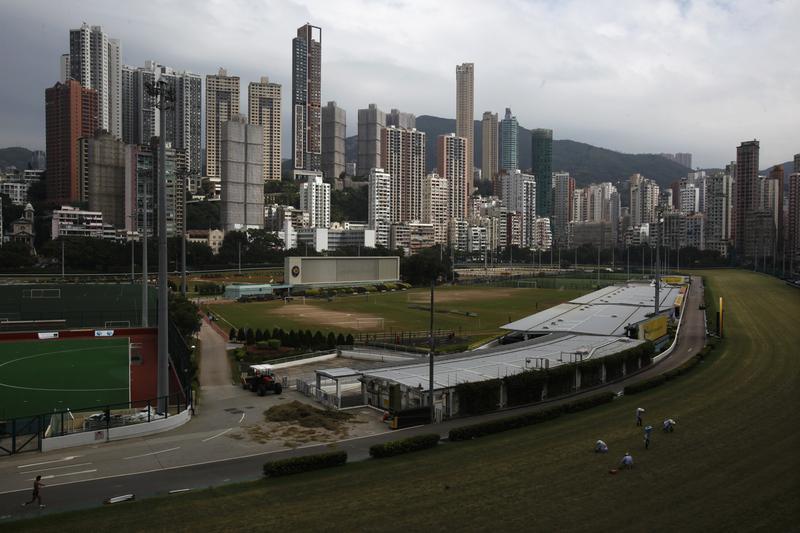 HONG KONG (Reuters) – Hong Kong’s Jockey Club canceled all races planned for Wednesday after pro-democracy protesters said they would target the Happy Valley racecourse where a horse part-owned by a pro-China lawmaker was due to run.

The government also said fireworks to mark Chinese National Day on Oct. 1 had been called off.

The Jockey Club said it had been “monitoring the situation” closely in Chinese-ruled Hong Kong, which has been rocked my more than three months of sometimes violent protests.

“It has conducted a thorough risk assessment of the race meeting tonight and concluded that it should be canceled in order to preserve the security and safety of people and horses,” the club said in a statement, without specifically mentioning the protests.

A horse called Hong Kong Bet that had been due to run in the evening program is part-owned by lawmaker Junius Ho, who has taken a firm line on the protesters, calling them “black-shirted thugs”.

Happy Valley, nestled in the hills of Hong Kong island, is a tightly populated, up-market residential area next to the Causeway Bay shopping district. There has been a horse-racing track there since just after British colonial rule began in the mid-1800s.

Races are held in the evening to avoid the sub-tropical heat of the day.

Police fired water cannon and volleys of tear gas on Sunday to disperse protesters, many of them masked and wearing black, who threw petrol bombs and set fires in Causeway Bay and the nearby Central district.

In a direct challenge to Beijing, some protesters threw bricks at police outside the Chinese People’s Liberation Army base and set fire to a red banner proclaiming the 70th anniversary of the founding of the People’s Republic of China.

Demonstrators are angry about what they see as creeping interference by Beijing in their city’s affairs despite a promise of autonomy.

The Hong Kong government said on Wednesday a giant fireworks display over the harbor planned for Oct. 1 had been called off “in view of the latest situation and having regard to public safety”. The display usually draws huge crowds on either side of the harbor.

The last time the Oct. 1 fireworks were canceled was during the 2014 Umbrella movement, when pro-democracy protests gridlocked parts of the city for 79 days.

The spark for the latest protests in June was planned legislation, now withdrawn, that would have allowed people to be sent to mainland China for trial. But they have since broadened into calls for universal suffrage.

Hong Kong returned to China in 1997 under a “one country, two systems” formula that ensures freedoms not enjoyed on the mainland.

Sunday’s violence followed a peaceful rally outside the British Consulate where protesters said “one country, two systems” was dead and urged Britain to call on China to stand by its promises.

China says it is committed to the arrangement, denies meddling and says the city is an internal Chinese issue. It has accused foreign powers, particularly the United States and Britain, of fomenting the unrest and told them to mind their own business.

Hong Kong democracy activists urged members of the U.S. Congress on Tuesday to pass legislation to combat human rights abuses in the city, rejecting any suggestion that such a move would be inappropriate U.S. involvement in another country’s affairs.

The Hong Kong government said foreign legislatures should not interfere.

A pro-China supporter is escorted out of a shopping mall by police after waving the national flag of China, at Harbour City in Hong Kong, China, September 18, 2019. REUTERS/Jorge Silva

“The ‘one country, two systems’ principle has been fully and successfully implemented,” a spokesman said in a statement. “Human rights and freedoms in Hong Kong are fully protected.”

Soccer fans were due to gather in a Causeway Bay park on Wednesday evening for an anti-government human chain. Many soccer fans defied the law to boo the Chinese national anthem before a World Cup qualifier against Iran last week.