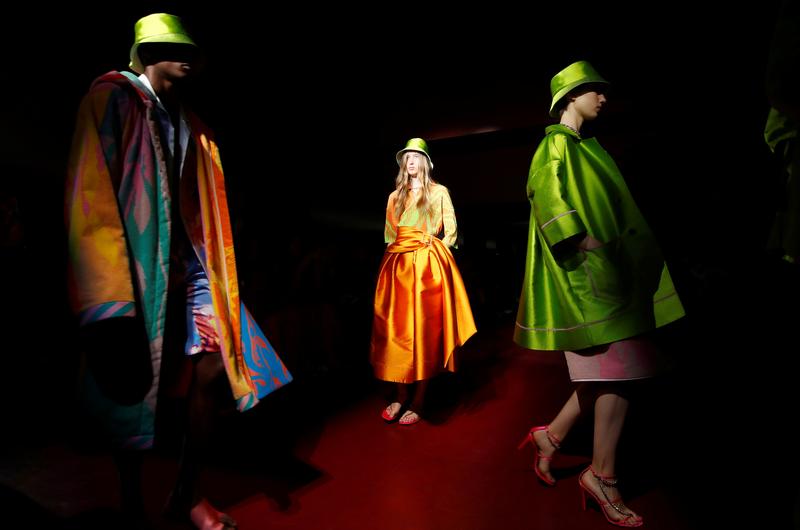 The UK-based label unveiled its latest womenswear line as well some new creations for men on the catwalk, taking fashionistas to the beach with plenty of floral patterns and bright hues – orange, lime, turquoise and pink.

The ballroom theme came in the shape of voluminous skirts synched at the waist, corseted tops and asymmetric draped silk gowns. Sparkling jewelry and stiletto heels added to the glamorous evening feel.

Male models wore silky suits as well as floral printed shirts and loose cropped trousers, accessorised with summer hats and sandals. One model looked like he was heading straight for a dip in the sea wearing a colorful bathrobe-like design over shorts and an undone shirt.

“For us it was not really about launching menswear yet because we are not yet, but it was more about seeing how to change the female silhouette,” Pilotto told reporters backstage.

“As male designers we feel that more than ever it’s important to connect even deeper to the garments so we wanted to be able to try them on ourselves and understand how they feel.”

The designers said they wanted to create an abstract floral painting feel to the line, whose mixed designs were also inspired by couples borrowing each other’s clothes.

“We want to explore that idea further, it’s a kind of a gender neutral range, which depending on how it’s worn can be either very masculine or very feminine and we feel that’s a very modern way forward,” Pilotto said, adding the silhouette was deliberately straight with odd bouts of volume.

The duo also presented a new leather goods line made up of satchels, backpacks, mini pouches and floral tote bags in bright colors. The designers said they wanted the bags to be playful.

The brand, which launched in 2007, has dressed numerous celebrities and was the bridal choice for Britain’s Princess Eugenie when got married at Windsor Castle last year

Milan Fashion Week is the third leg in the month-long Spring/Summer 2020 catwalk run which began in New York and also includes London and Paris.