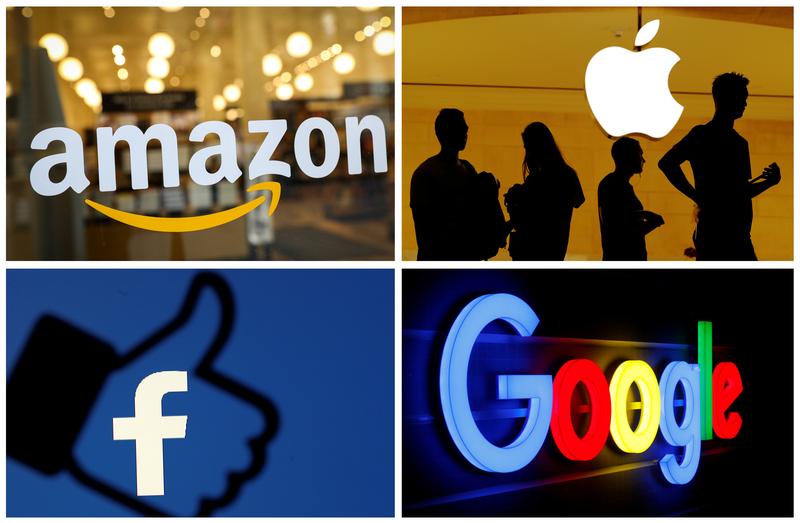 WASHINGTON (Reuters) – Top U.S. antitrust enforcers go before the Senate Judiciary Committee’s antitrust panel on Tuesday at a time when a little- watched series of laws designed to protect consumers from monopolies are being used to investigate Alphabet’s Google and others among the world’s most dynamic companies.

FILE PHOTO: The logos of Amazon, Apple, Facebook and Google are seen in a combination photo from Reuters files. REUTERS/File Photos

Makan Delrahim of the U.S. Justice Department’s Antitrust Division and Joe Simons, chair of the Federal Trade Commission, will testify. The Trump administration is in the early stages of investigating Google, Facebook, Amazon and Apple for allegedly using their clout illegally to hobble competitors.

Senator Mike Lee, a Republican and subcommittee chair, is expected to ask how well the Justice Department and the FTC are collaborating, a source said on background.

Reuters and others reported in June that the agencies had divided up the companies, with Justice taking Google and Apple while the FTC took Facebook and Amazon. The Justice Department later said it was opening a probe of online platforms.

Senator Patrick Leahy is expected to ask whether there are safeguards to prevent President Donald Trump’s White House from insisting that antitrust be used for political ends, according to a source close to Leahy’s office.

Trump is a long-time critic of AT&T unit CNN, and the Justice Department sued to stop AT&T from buying Time Warner, CNN’s parent, but lost. Delrahim has denied making decisions based on politics. {nL2N1XO15S]

In June, a group of senators asked the government if the president had interfered in a review of the proposed $26 billion merger of T-Mobile US Inc and Sprint Corp.

Democratic Senators Amy Klobuchar and Cory Booker, who are running for president and sit on the subcommittee, signed the letter, as did Senator Elizabeth Warren, also a candidate for the Democratic nomination.

The Justice Department approved the deal, but states sued to stop it.

Klobuchar and Senator Richard Blumenthal may also ask about legislation introduced in August to allow harsher penalties for companies that violate antitrust law.