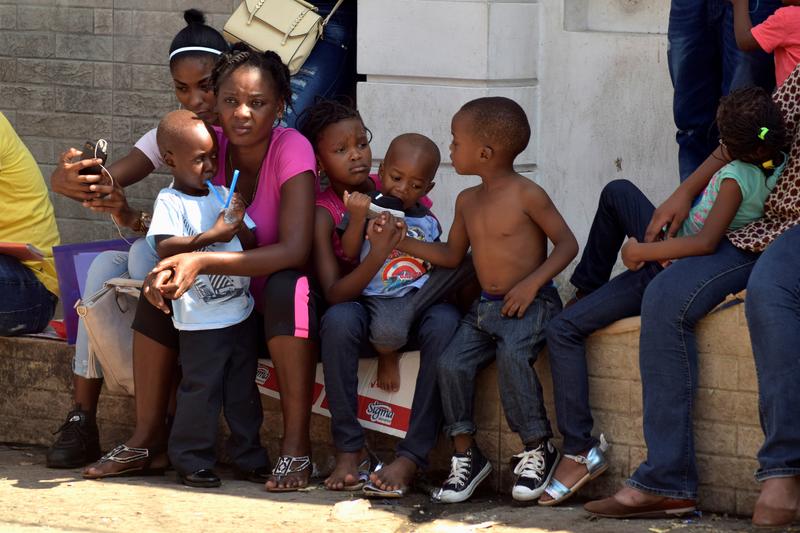 Migrants from Haiti queue outside the Mexican Commission for Refugee Assistance (COMAR) to apply for refugee status in Mexico, in Tapachula, Mexico September 13, 2019. REUTERS/Jose Torres

Now, the agency fears the burden on employees already working up to 15 hours a day will increase after the U.S. Supreme Court decided to restore a Trump administration policy banning most asylum applications at the U.S.-Mexico border.

Like many others in Tapachula, a gateway city between Guatemala and Mexico, Danny Perez, a 29-year-old Honduran taxi driver who said he fled to escape extortion by gangs, dreamed of reaching the United States. But as the reality of Trump’s immigration policies sets in, he is trying to settle in Mexico.

Perez cannot work without papers while his claim is being processed, and he has no money to rent a room.

“This isn’t easy,” said Perez, who began the process of seeking asylum last week and worries he may go “crazy.”

Resigned to waiting, he spends his nights on a patch of sidewalk across the street from the refugee office in Tapachula, where he feels safe amid the steady churn of migrants, trying to snatch a few hours of sleep under the street lamps’ neon glow.

Wednesday’s Supreme Court action, which reinstated a U.S. policy stipulating that migrants crossing another country en route to the United States must apply for asylum in that country, will likely exacerbate the demand in Mexico, said Andres Ramirez, head of the Mexican refugee agency, COMAR.

“It’s worrying,” Ramirez told Reuters. “We expect this will add to the growing numbers we’ve been seeing.”

Alexander Espinoza waited half a year. His life once revolved around making it to U.S. soil: The 33-year-old Salvadoran says he tried to enter illegally 10 times, including six attempts in six months. But as Trump ratcheted up his anti-immigration rhetoric, Espinoza decided to call Mexico home.

Last week, COMAR recognized him as a refugee, ending a wait that began in March. He faces more delay for his residency card. But he was not downhearted, showing off the braided bracelets he has made, his fledgling business.

Even before Wednesday’s Supreme Court action, applications at COMAR were expected to hit 80,000 in 2019, more than double last year’s total. In August alone, requests more than tripled from last year to 8,178.

On Friday morning in Tapachula a few dozen asylum-seekers waited for their appointments, armed with colorful plastic folders carrying the paperwork that will determine their fate.

Sitting at a desk stacked high with manila case folders, Claudia Briseno said COMAR employees like her have been working at a grueling pace. The office’s 63 employees are processing 16,350 applications – or about 260 per person.

Days stretching 10, 12 or even 15 hours are the norm, Briseno said, her voice cracking.

“We’re making triple the effort so we can give everyone access to the refugee system,” she said.

The staff has streamlined processes, reducing the frequency with which asylum-seekers must report in, Briseno said. But the latest change in U.S. immigration policy may upend that progress.

But until COMAR is better funded, migrants will be short of support to rebuild their lives in Mexico, said Enrique Vidal, coordinator for human rights group Fray Matias de Cordova.

“COMAR lacks, on a structural level, the capacity to attend to the reality we’re living in,” he said.

For some, asylum in Mexico is simply a stop on the road. Under the U.S. policy reinstated by the Supreme Court, migrants may still have a shot at U.S. asylum if their application is rejected in another country.

Roger Fuentes, a Cuban home goods vendor who arrived in Tapachula in August, said the United States remains his goal.

“You have to request (asylum in Mexico) or you won’t have other options,” said Fuentes, 34.

He said he will not try to throw his Mexican asylum case, though he knows that rejection could help his U.S. bid.

Similarly, Teresa Cardonell said fear of deportation back to Cuba has made her determined to do everything right in Mexico – including applying for asylum. But her mind is fixed on the United States. Terrified after being robbed in Tapachula, she dyed her blonde locks brown to try to blend in.