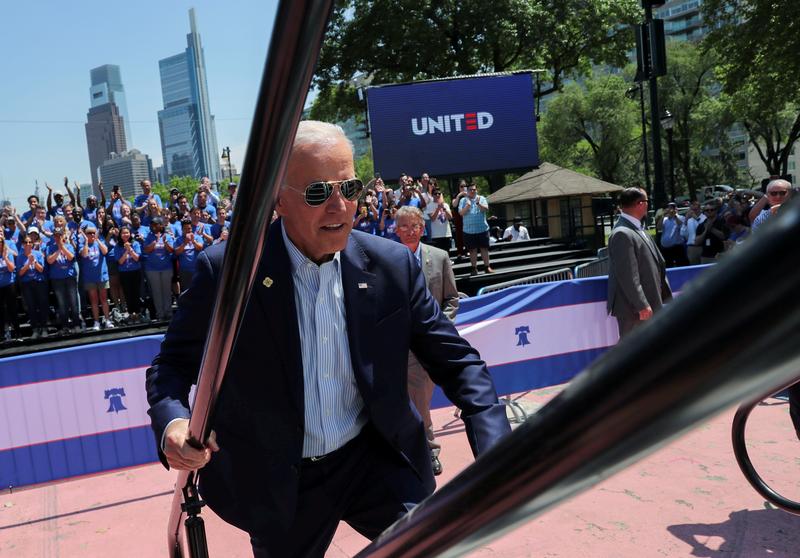 PHILADELPHIA (Reuters) – Democrat Joe Biden kicked off his 2020 presidential campaign in April at a Teamsters union hall in Pittsburgh, the one-time U.S. steel capital, a well-choreographed show intended to prove that blue-collar voters were central to his effort to win the White House.

“I make no apologies. I am a union man,” he declared.

But in Philadelphia, where Biden on Tuesday will be among a half dozen Democratic presidential candidates appearing at what labor union federation the AFL-CIO has billed as a “Workers’ Presidential Summit,” there are signs of cracks in Biden’s union support.

Philadelphia for Biden is not just any city. It is home to his campaign headquarters, the biggest city in his home state of Pennsylvania, and an area that has long been home to oil refineries — and their union employees. And it is just miles from Delaware, which he represented in the U.S. Senate for more than 30 years.

More than a dozen current and former union leaders and workers who spoke to Reuters recently in Philadelphia, questioned Biden’s loyalty.

In embracing calls to phase out the fossil fuel industry that many of the region’s pipefitters and steelworkers rely on for jobs, they say, the former vice president and Democratic front-runner risks losing his “hard-hat” appeal in a critical swing state.

“I think Biden has taken our votes for granted. Our plant closed and we didn’t hear from him, said Ryan O’Callaghan, the former union head of a now-shuttered Philadelphia refinery.

The Philadelphia Energy Solutions refinery, the largest and oldest on the U.S. East Coast, closed its doors in August after a massive fire, idling more than 1,000 employees including some 650 union workers.

For Biden, large job cuts in a key battleground state could have been a ready-made opportunity to burnish his blue-collar bona fides and force Republican President Donald Trump to defend how a major refinery in the state shut on his watch. Trump won Pennsylvania in 2016 with a margin of less than 1 percentage point over Democrat Hillary Clinton. Trump also prevailed with narrow margins in Michigan and Wisconsin, traditionally Democratic Rust Belt states.

Clinton beat Trump by only 9 percentage points among voters from union households, according to exit polls, much less than President Barack Obama’s 18-point advantage over Mitt Romney in 2012.

When auto union workers voted to strike at General Motors (GM.N) on Sunday, Biden tweeted, “Proud to stand with @UAW to demand fair wages and benefits for their members. America’s workers deserve better.”

But his silence on the refinery – and that of other Democratic presidential candidates for that matter – suggests how the party’s aggressive environmental agenda may be boxing Biden out of an issue that seemingly plays into his brand of politics.

Biden is not the only Democrat who must reconcile calls to phase out fossil fuels with the need to attract union workers who rely on refineries, power plants and pipelines.

But as someone who draws on his upbringing in the working class stronghold of Scranton, in northeastern Pennsylvania, and has been speaking the language of unions for years, Biden offers himself as the only candidate who can bring back Rust Belt workers who defected from Democrats to vote for Trump in 2016.

Terry Madonna, a political scientist at Franklin & Marshall University in Lancaster, Pennsylvania, said Biden needs to walk a finer line than some of his progressive rivals who can offer a full-throated endorsement on a range of policies without fear of angering moderates.

“Right now, he’s trapped between his historical support for the unions on issues of energy and the left wing of his party on environmental issues who are pushing for a Green New Deal, and he’s needs them both,” Madonna said.

Philadelphia labor support is important to any Democrat looking to win a statewide election, because large turnout in the region can offset Republican margins in the central part of the state, he said.

The criticism from workers in Biden’s own backyard underscores his challenges.

Most workers at the Philadelphia Energy Solutions refinery were laid off without severance pay and extended health benefits, while top executives collected $4.5 million worth of retention bonuses just weeks before the company filed for bankruptcy in July.

“He says the right things, but actions speak louder than words. I am not sure anyone could say he’s been there for the refineries at the moment,” said Denis Stephano, a Democratic activist and retired union head of a different refinery just outside Philadelphia.

Biden’s campaign did not directly respond to why he has stayed silent on the shuttered refinery, but noted Biden’s history of supporting labor, including helping usher in the 2008 bailout of the auto industry and opposing Republican-led efforts to limit union participation. Campaign officials also referred to how Biden’s clean energy plan calls for replacing oil industry jobs with well-paying, green-energy jobs.

Biden has won some union backing. The International Association of Firefighters – one of the nation’s largest unions with some 300,000 members – endorsed Biden on the first day of his campaign. The firefighters did not endorse any candidate in 2016.

The United Food and Commercial Works 1776 Keystone State, with some 35,000 members in Pennsylvania, has decided to endorse Biden, union president Wendell Young told Reuters for the first time.

“He has been a rock-solid supporter of labor over all these years. As much as I like all the Democrats, I know Joe and I know what Joe has done,” Young said.

But with 20 Democrats vying for the White House, including U.S. Senators Bernie Sanders and Elizabeth Warren whose anti-Wall Street message and opposition to trade deals also plays well with the blue collar constituency, most unions are unlikely to rush with an endorsement.

Sanders in August won the endorsement from the 35,000-strong United Electrical, Radio and Machine Workers of America, which has long supported the Vermont senator.

The signs of schism among union members when it comes to Biden are evident.

“If Joe is the candidate, he will definitely get our support,” Pat Eiding, head of Philadelphia’s AFL-CIO, said. “I do think with the refinery in Philadelphia, there are legitimate questions being asked about where he is.”

James Maravelias, head of Delaware’s AFL-CIO, which represents some 40,000 workers and endorsed Clinton in 2016, said 2020 Democratic candidates need to show why they deserve their backing.

“If Democrats think that trade union support is a slam dunk, they are sorely mistaken,” Maravelias said. “As for Joe Biden, I am not sure where he is on these issues. Haven’t seen him a long time.”