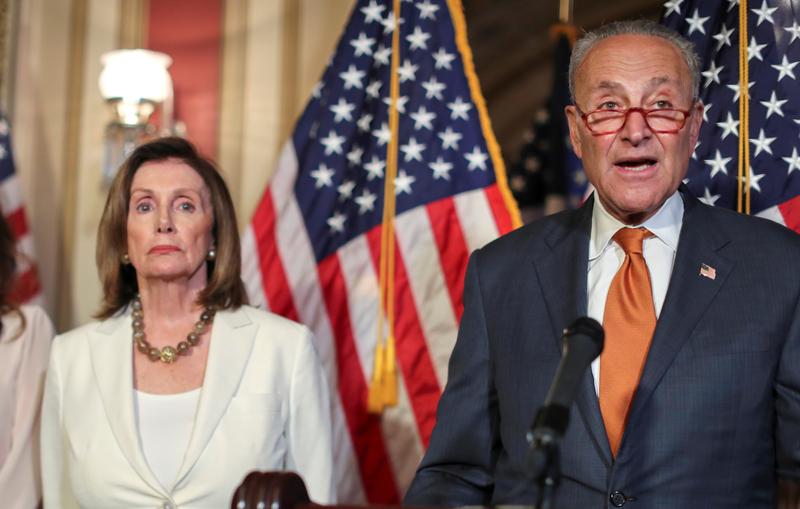 WASHINGTON (Reuters) – Top Democrats in Congress told Republican President Donald Trump on Sunday that any gun control legislation that falls short of universal background checks for gun sales “will not get the job done.”

Senate Minority Leader Chuck Schumer and House of Representatives Speaker Nancy Pelosi said they spoke to Trump by phone on Sunday morning, which marked 200 days since the Democratic House passed legislation to expand background checks to all gun purchases.

The Republican-controlled Senate has yet to take up the bill, but Majority Leader Mitch McConnell told a radio show earlier this month that he would allow votes on gun bills when he knew what the president’s position was.

In the aftermath of a series of mass shootings in August that killed more than 30 people, Trump has been discussing potential legislation with lawmakers in both parties. He said on Wednesday that progress was being made on gun legislation, adding that many areas were under discussion, including background checks.

“This morning, we made it clear to the President that any proposal he endorses that does not include the House-passed universal background checks legislation will not get the job done, as dangerous loopholes will still exist and people who shouldn’t have guns will still have access,” Pelosi and Schumer said in a joint statement after the phone call with Trump.

The two leaders said they promised to join Trump “for a historic signing ceremony at the Rose Garden” if the president would endorse the legislation and lean on McConnell to pass it “to save as many lives as possible.”

The White House did not comment on the call and did not respond to a request for a comment.

McConnell did not immediately respond to a request for comment.

Previous attempts to pass gun control after mass shootings, including the December 2012 killings of 20 children and six staff members at Sandy Hook Elementary School in Newtown, Connecticut, have mostly failed in the face of fierce lobbying by the National Rifle Association and other gun groups.

The shooting sprees in August in Texas and Ohio put renewed focus on the issue. Trump said he favored action, possibly on tackling mental health issues related to the violence or expanded background checks.

The White House has yet to outline any specific proposals, but officials said the measures might include expediting the death penalty for mass shooters.