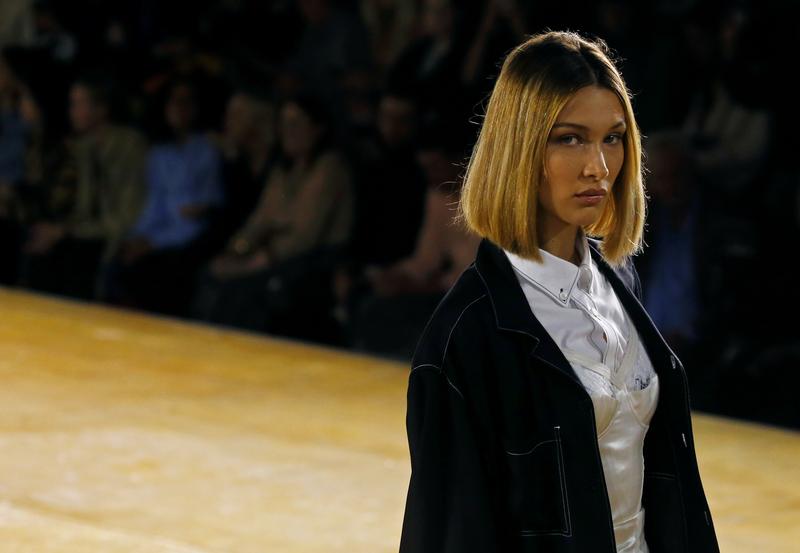 The Burberry creative chief, who has successfully revamped the brand since joining last year, had a star-studded catwalk to unveil the Spring/Summer 2020 line with models including Kendall Jenner and sisters Gigi and Bella Hadid strutting down a runway laid out with a Victorian-inspired sound system installation.

For the “Evolution” line, Tisci said he had gone through the archives to when founder Thomas Burberry created the brand in 1856, and this inspired his latest designs: cinched waists and eye-catching sleeves that were voluminous, slashed at the front or fringed.

Tisci put fringes on skirts, sleeves and across dresses that also had chain detailing. Printed skirts and tops nodded to nature, depicting trees and animals.

Women’s silk shirts were long and loose, suits had box pleat or asymmetric skirts – short at the front and long at the back, while blazers were sculpted. Trousers were high waisted. There were also pinstripe suits.

Tisci put ruffled lace on the front and sleeves of dresses, which for the evening were adorned in crystal mesh or ostrich feathers. Footwear was split-toe block-heel boots and sandals.

“My first year at Burberry was about understanding and refining the new codification for the house. With that foundation in place, I feel ready to start exploring what’s at the heart of this incredible brand,” Tisci said in show notes.

“This is the story behind this collection, a collection inspired by our past and dedicated to our future. It’s the evolution of our Burberry kingdom.”

Tisci used a simple color palette of gray, black, white and beige, with dabs of red, blue, pink and yellow. There was also plenty of gingham.

Menswear consisted of sharp suits and trench coats that were worn with belts. Tisci added details such as crystal embroidery, zips and rib-knit panels.

Tisci has enticed younger buyers with his casual designs and revamped “TB” logo and there were plenty of luxury tracksuits, T-shirts, snazzy jackets, sneakers, sandals and baseball caps – with long sides or diamanté veils.

“…The Victorian era (was) a time in Britain for great change and progress, an era that has always inspired me and my work,” Tisci said.

“(Burberry) chose to present his company with an emblem of a knight on a horse, but for his family crest, he instead chose a unicorn. Thomas Burberry was a daring innovator but also a romantic and a dreamer.”

In an Instagram post ahead of the presentation, Burberry said the show had been certified as carbon neutral.

With younger clients’ changing tastes and growing environmental awareness, many brands are seeking to improve their green credentials.

“We have offset our impacts such as the flights of guests traveling to London specifically for the show and the build and production of the event through…projects which prevent deforestation and conserve tropical rainforest in the Brazilian Amazon,” Burberry said.