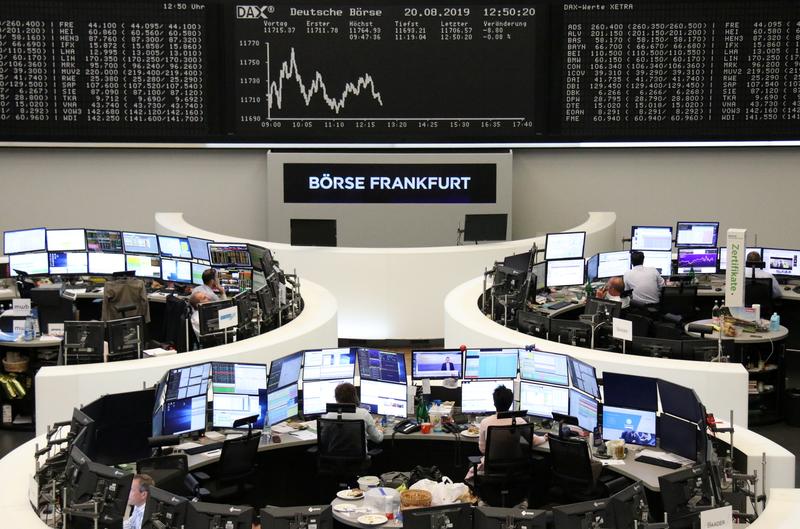 MILAN (Reuters) – Oil prices climbed to four-month highs on Monday and world stocks slid after weekend attacks on crude facilities in Saudi Arabia shut about 5% of the world’s supply and fueled worries over the impact of an oil shock on economic growth.

Brent crude futures rose nearly 20% at one point in their biggest intra-day gain since the Gulf War in 1991, and U.S. futures jumped almost 16%, both hitting their highest level since May. But prices came off their peaks after U.S. President Donald Trump authorized the use of the country’s emergency stockpile to ensure stable supply.

The surge in crude prices comes at a time when central banks in the United States, Europe and Asia are easing monetary policy to fight a slowdown in the global economy amid a drawn out trade war between Washington and Beijing.

“Spikes in oil prices when the global economy is already flirting with the idea of recession is not ideal and, if repeated and sustained, could ultimately be what tips us over the edge,” said Craig Erlam, analyst at OANDA in London.

Data from China further underscored worries about the slowdown in the world’s No. 2 economy. Industrial production grew at its weakest pace in 17-1/2 years amid rising U.S. trade pressure and softening domestic demand.

Trump also said the United States was “locked and loaded” for a potential response to the strikes on the Saudi facilities, after a senior official in his administration said Iran was to blame.

That inflamed fears about Middle East tensions and worsening relations between Iran and the United States, powering safe-haven assets, with gold up 0.92% to $1,502.1 per ounce.

“In the very near-term, we may also see a pick-up in safe-havens,” he added.

“Central banks are likely to look through the inflationary impact of higher oil prices but the added geopolitical risk to an already fragile backdrop will not go without notice.”

The U.S. Federal Reserve is due to hold its policy meeting on Wednesday, at which it is widely expected to ease interest rates and signal its future policy path.

Saudi Aramco’s longer-dated bonds bore the brunt of the falls with the 2049 issue dropping nearly 3 cents in the dollar to touch their lowest since early August, data from Tradeweb showed.

“Markets had become too sanguine over the last few months about the geopolitical risks facing countries allied with the US against Iran, with Saudi Arabia particularly vulnerable,” said Patrick Wacker at UOB Asset Management.

In currency markets, the Saudi news pushed the yen up 0.2% to 107.88 per dollar, while boosting currencies of oil-exporting countries.

The currencies of oil importers such as Turkey and India underperformed.

FILE PHOTO – Passersby are reflected on a stock quotation board outside a brokerage in Tokyo, Japan, August 6, 2019. REUTERS/Issei Kato

The U.S. dollar was little changed against a basket of currencies.

Additional reporing by Swati Pandey in SYDNEY and Karin Strohecker in LONDON; Editing by Toby Chopra