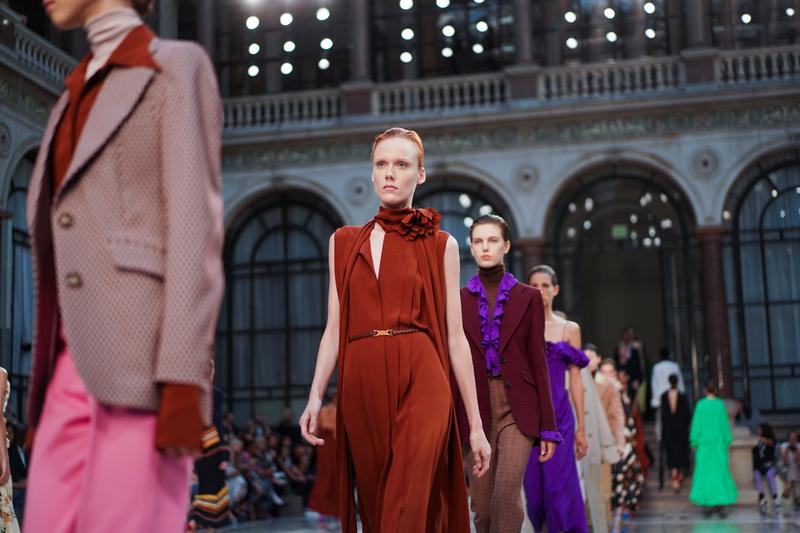 LONDON (Reuters) – Victoria Beckham chose a light and fluid silhouette for the female wardrobe next spring, presenting a line for “women in motion” at her London Fashion Week show on Sunday.

With her husband David and their children watching from the front row, Beckham said the spring/summer 2020 collection highlighted her love of contrasts, mixing tailored suits with floaty dresses and pale neutrals with bold colors.

The outfits were layered: jackets or long coats over large-collared shirts, which nodded to 1970s styles, with the latter on top of rollneck tops. Trousers where long, straight and high-waisted.

Dresses came in bold purple, yellow, green, bronze, black and softer colors, and were cut in various styles: from halterneck and asymmetric to low-cut and long-sleeved. Most had feminine ruffles on the neckline, shoulders or waist as well as soft floral patterns.

“Lightness, easiness, freedom. Those are the ideas I was thinking of for this collection. It’s about dynamic women today, women in motion,” Beckham said in show notes.

“Controlled and free, living life, reality and believability. There is always a duality in women, moving between different ideas, different moods. I want clothes that move with a woman, that move with her life.”

Beckham also had dabs of prints in the collection – floral or scribbled-like handwriting.

Skirts were calf-length, pencil-shaped and slit at the front and sides, adding to the sense of fluidity. Beckham also put ruffles shirts. Accessories included floral neckpieces, large brown sunglasses and colorful heels in purple, turquoise and other bold shades.

Ahead of the show, around 30 demonstrators from climate activist group Extinction Rebellion staged a protest outside the venue, the Foreign and Commonwealth Office, seeking to draw attention to the fashion industry’s impact on the environment.

While walking to the venue, the protesters temporarily stopped traffic on the way while grouping on a main road for a few minutes at a time.

Extinction Rebellion, which has staged protests in recent months calling for action to tackle climate change, had previously called on London Fashion Week organizers to cancel the five-day industry event where designers are unveiling their latest womenswear lines.

At the Friday opening, a small group of its climate activists glued themselves to a door of the main Fashion Week venue and poured out a “bleeding” red carpet.